Buizel (or ブイゼル Buoysel) is a Water-type Pokemon resembling a bipedal orange weasel. Debuting in Pokemon Diamond and Pearl, Buizel can evolve into Floatzel at Level 26.

Buizel is an orange Pokémon resembling a weasel and a sea otter. The yellow collar that surrounds its neck can be inflated and used as a flotation device when it inhales. By inflating this sac, it can keep its face above water to watch for prey movement. It has two blue fins on its arms and a tail, which appears to be split, that resembles a fish's fin. Its tail acts as a boat propeller by spinning, though it was seen flying using its tail. There are parallel marks on their cheeks. Additionally, Buizel has cream paw pads on its feet. On its back, it has one cream spot if it is female or two if it is male. It is most likely found in or near swift-moving rivers. 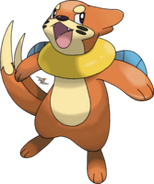