This Pokémon buries itself on the seafloor, leaving only the growth on its head exposed. By emitting a low level of psychic power, it serves as radar to detect prey. Additionally, the protuberance can emit a strong psychic power. Opponents bathed in this power are stricken with terrible headaches and fall unconscious. When emitting this power, Bruxish grinds its teeth. This sound is enough to send nearby Pokémon fleeing immediately. In the Alola region, lifeguards allow this Pokémon to remain in their area to prevent other, dangerous Water types from gathering.

Bruxish may be based on a filefish or a reef triggerfish.

Bruxish may be a combination of bruxism and fish. 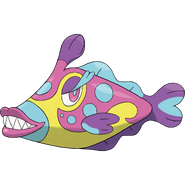 Official art
Add a photo to this gallery
Retrieved from "https://fantendo.fandom.com/wiki/Bruxish?oldid=3203273"
Community content is available under CC-BY-SA unless otherwise noted.