Bruce is a blue Bob-omb who first appeared in Paper Mario as a minor character where he was locked up in the Koopa Fortress by the Koopa Bros. along with his friends, later when Mario released him and his friends, they have moved to Koopa Village for safety, he also develops a crush for Bombette.

Bruce appears as a Bob-omb that is blue in color.

Later, after he heard that Bombette is dating Jerry, Bruce was jealous and he confronted Jerry, then Bombette showed up and explain Bruce that she would never love him at all and would always hate him and tells Bruce to stay away from her, later Bruce was depressed, later he is busy finding the tallest building of Rougeport to commit suicide, when he found one, he is climbing up there, as he is about to commit suicide, Tony and Vinny has showed and yelled "JUMP!" because they have never seen someone commit suicide before, Bombette and Jerry has noticed this, Bombette feels sorry about what she has done, but she can't leave Jerry, Jerry has said to save your friend, then Bombette has showed up, convincing Bruce not to jump, Bruce said that it's too late, Vinny told Bombette to shut up because they get good money for this, Tony agrees, Bombette climbs up too and goes to Bruce and kisses him, Bruce decided not to commit suicide, but Tony and Vinny will become friends with Bruce and Bombette told Bruce that she thinks you would be a great sweetheart.

Bruce really has a crazed crush on Bombette, but Bombette and the other Bob-ombs seems to be annoyed about it, when he saw Jerry and Bombette dating, he confronted Jerry but then Bombette yells at Bruce to stay away from her, later Bruce attempted to commit suicide by jumping off a building, but Bombette stopped him and started dating.

Bruce absolutely dislikes Jerry since Bombette is in love with Jerry, but they seem to get well along after Bombette started dating Bruce.

Tony and Vinny has saw Bruce about to commit suicide, they have never seen someone commit suicide and they decided to yell "JUMP!" as they are rooting for him to jump, later after Bombette stopped Bruce, Tony and Vinny seems to be fine about it, and seems to get well along with Bruce.

Mario and Bruce briefly interacts with each other, but he seems to be in friendly conditions with Mario.

Bruce about to commit suicide before Bombette stopped him 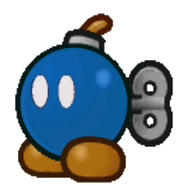 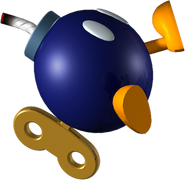 Bruce's 3D Artwork
Add a photo to this gallery

Retrieved from "https://fantendo.fandom.com/wiki/Bruce?oldid=3198668"
Community content is available under CC-BY-SA unless otherwise noted.