Broozer is a boxing ghost from the New Super Mario Bros. series. He is similar to a Boo, except that he walks on two legs and he can destroy many things with his punches. He takes either one fireball or three jumps to defeat.

Broozer reappears playable in the game Super Mario MHL. He shares chemistry with Boo and King Boo. However, Broozer will not stop going when looked at, whereas, Boos will. Another difference between the two ghosts is that Boos will only die when Mario is equipped with a star. Broozers however, will die after they are jumped on three times. Jumping once will stun it for half a second, but then it continues to run and punch; as seen in New Super Mario Bros., he is useful for punching out paths, leading to star coins, secret doors, or just another part of the level.

Broozers are common enemies in the locations Brainrain University and Vortex Mansion. In the overworld, he quickly follows the player punching, that makes them  very, because being hard to avoid. However, in-battle, they can perform a Punch Smash or a Spinning Slide.

Also, they actually take a different look in this game. They don't have feet, so they float instead of walking or running. They also have a dark blue coloration instead of lavender and have white eyes instead of yellow.

Broozer is the Mini Boss of the 6th Board. He, along with King Boo, were sent to Stop the player. He Fights like a boxer and you must punch him to defeat him. 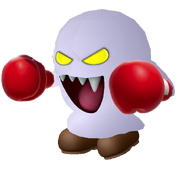 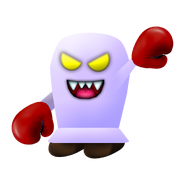 a broozer in super mario spikers