Fantendo - Game Ideas & More
Register
Don't have an account?
Sign In
Advertisement
in: Free to use Characters, Fan Characters, Females,
and 5 more

Brooklyn, usually called just Brooke, is a minor character in Super Mario and the Underworld Trials. She, alongside her friends, appear in the Honeyhive Elementary course, and helps Mario and friends collect Mystic Stones throughout the area.

Being a Bea, Brooke is a humanoid bee-like creature. She resembles a small child with light-yellow skin and brown hair, which is braided into a ponytail. She also has four brown arms, two on either side, and two yellow antennae on her head. Brooke also has a pair of wings, used for flying. Physically, Brooke is also taller than most Bea students her age.

Brooke's outfit consists of blue overalls (said to be the same brand Mario and Luigi use), with a black stripe on each leg. Under these overalls, she wears a white t-shirt with black stripes, which also has a turtleneck collar. She also wears brown shoes and, like most Beas, wears glasses, with hers being oval-shaped with light-blue rims. In her pajamas, she wears white button-up, long-sleeve shirt with blue sweatpants. Both of these have black stripes.

Brooke is described as the smartest of her circle of friends. She is intelligent, studious, and usually gets perfect scores on her assignments. Belle also normally calls her a "teacher's pet", as she is usually the one to help her teachers when she asks for it. She has a good level of social skills, able to make fast friends and is generally kind towards others. In spite of this however, Belle and Brooke are sometimes seen arguing over anything they disagree on (usually Brooke trying to prove that Belle's logic if flawed). The two usually make up in the end thanks to Brittany's help though.

Brooke also has a love for reading, and often times is seen sitting in her room reading a book. She almost never passes up an opportunity to play with her friends though, and takes good enjoyment in being around others.

Brooke makes her debut in Super Mario and the Underworld Trials. In this game, she and her friends are found at Honeyhive Elementary, the fifth main course in the game, as third-grade students. They agree to help Mario and co. find the Mystic Stones throughout the area. Most of the course's Mystic Stones come from helping the three Beas, such as helping them win a relay race, helping them rid their clubhouse of intruders, and finding a stuffed animal at night. At one point, the three girls are held hostage by Bugaboom when he attacks the school, and they must be rescued by defeating the monster.

Brooke makes her first playable appearance in Super Mario Kart: Switch Circuit as an unlockable playable character. In this game, she is in the light weight class, having low top speed and weight, but having high acceleration and handling. Under normal circumstances, Brooke must be unlocked by earning a three-star rank on all cups in the 200cc engine class, including the 8 Cup. However, if one has a save file of Super Mario and the Underworld Trials on their Nintendo Switch, she alongside Belle, Brittany, Pearl, Ruby, and Sarina become default characters. Brooke's special item is the Mystic Stone, an item she shares with the aforementioned characters.

Brooke also makes an appearance in The Rescue Squad: Birthday Blitz. In this game, she and her friends are found in Honeyhive Elementary, playing in their secret hideout. However, the Rescue Squad comes by and invites them to Pearl's seventh birthday party, which they agree to attend.

Brooke appears as one of the playable characters in Sleepover Adventures. In the game, she is invited to Pearl's sleepover, and while dreaming, she ends up in the dream realm of Sala. However, she is kidnapped by the Muna kingdom, and held prisoner Honeyclimb Fort. When rescued, she joins Pearl and her friends on their quest. Similar to Luigi in Super Paper Mario, Brooke has a super jump ability; by crouching, she is able to jump extremely high to reach new areas. She can also damage enemies along the way.

Though Brooke does not physically appear in Stampede Breakfast 2, King Boo has an alternate costume based on her. He wears her glasses and has a pair of antennae, as well as a wig resembling her hair.

Brooke appears as a playable character in Super Mario Spikers, appearing as a Defensive-type Captain. She wears a white lab coat with gray pants, with black stripes at the sleeves and legs. To help her and her team, she built several Mini-Speks from Mini Mario & Friends: amiibo Challenge, which follow her and try to save balls out of her reach. She can also create more to attack opponents. Her emblem is a white bee, and her theme is Chiptune. 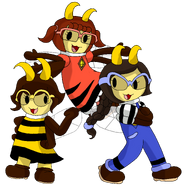 Group art of Brooke alongside Belle and Brittany. 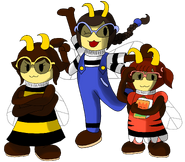 Group art of Brooke alongside Belle and Brittany.

Brooke in Super Mario and the Underworld Trials. 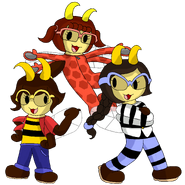 Group art of Brooke alongside Belle and Brittany in Sleepover Adventures. 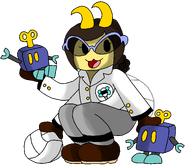 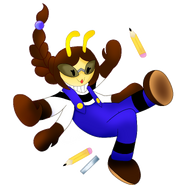 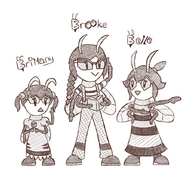