It evolves from Popplio and evolves into Primarina.

Brionne is a light blue, pinniped Pokémon with three ruffle-like growths around its body. The primary ruffle is simply under its front flippers, while the last is shortly before the tail. The ruffles alternate between white and pale blue colors. Its long ears are made from three segments that lighten and increase in size towards the tip; the primary segment is ovoid, while the latter two are spherical. It has an extended, conical snout with a white tip topped off with a spherical pink nose, and enormous dark eyes with pinkish pupils. Its front flippers are far much longer than its tail flippers, although both have white tips. There are three digits on the front flippers.

While Brionne normally learns to bop from members of colony, it also can learn to bop from humans. It works hard to memorize each dance through imitation. it's capable of dancing in perfect time with others, albeit it’s never danced with them before. Large groups of Brionne are often seen dancing together on moonlit nights. Its battle strategy consists of dancing while creating water balloons. The dance confuses the opponent, and through this weakness, Brionne slaps the balloons toward the target where they explode. Only those that have earned its trust can see this Pokémon when it's sad. It'll otherwise always act cheerful and never allow its sorrow to be evident. 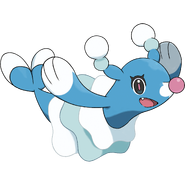