Fantendo - Game Ideas & More
Register
Don't have an account?
Sign In
in: Characters, Free to use Characters, Heterosexual Characters,
and 15 more

Back to page
View source 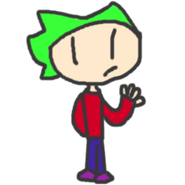