A quick disclaimer: I will try to work on this whenever I can. It will probably be done bit by bit and may take a long time to finish. 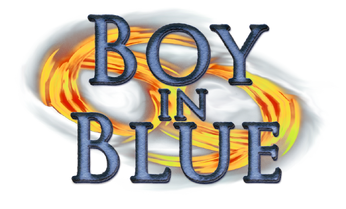 Boy in Blue is an action-adventure game coming to the Wii U. It tells the story of a group of friends discovering the secrets of Cromar, a land sealed away a long time ago due to its dangerousness to the rest of the world. The game is the first in the series. The project originally started in January of 2013, and got rebooted in December of 2015.

The story focuses on five friends getting dragged into The Great War of Cromar, while discovering the secrets this mysterious land is hiding.

The story begins with the unexpected death of Arlen Dolor, a smart young man and a good friend of the five main characters. When going through his belongings, the group discovers a small stone alongside sheets with calculations on them. They indicate that the stone must be taken to a particular place on Earth. The group eventually tracks down this location and decides to go there, to fulfill what may have been their friend's last wish. The intro credits follow, where paintings of their journey are shown.

With no idea what to expect, the group eventually enters a large abandoned cave somewhere in Eastern Europe. After exploring the cave a bit the stone begins to glow and leads the group to a particular half broken wall, with extremely bright light shining through its cracks. After they place the stone into a small hole the wall completely breaks, and the group decides to walk into the light. Tom quickly takes the stone out of the hole and runs after his friends.

The story will be told by cutscenes between areas. Characters will also interact with each other during gameplay. The story is not fully finished yet, and it will be written in full detail as soon as possible.

The gameplay is mainly focused on combat, while also including exploring aspects and many puzzles. The player controls various characters during the story, with each having a unique set of moves, weapons and abilities, and therefore different play styles.

The goal is to combat hoards of enemies in order to conquer an area. There are various hoards in every area, and every single one of them has to be defeated to make the next hoard appear. Sometimes a hoard is hiding somewhere and the player has to find them first in order to battle them. When all enemies in an area are defeated, the player must face off against a mini boss to finally claim the area.

The world of Cromar is divided into 21 regions, each acting like a seperate level or episode. Each region has various missions that are not always solely focused on combat. For example, missions may also be about finding an important item or location necessary to continue the story.

Missions are usually activated by entering a certain location and/or encountering a character. In between these missions, the player is free to travel through Cromar. A large amount of exploration and knowledge of areas is often required to activate missions.

As the story progresses, players will see their characters' appearances change gradually. The degree in which this happens depends on the choices the player makes, such as picking up lots of recovery items or not, the amount of damage they get, etc. There are also some story-based changes that the player can't prevent.

The story takes place in Cromar, a land sealed away a long time ago. Seperated from earth, it developed its own species and environmental system. During the story, the land is in war, slowly destroying itself.

A map of Cromar will be shown here, along with detailed descriptions and pictures of specific locations.

Unfortunately my tablet broke so I can't make new artwork for a while.

Camille Amissa
Add a photo to this gallery

During gameplay, the characters have conversations with each other all the time, often with a humorous tone to them.

A list of quotes will soon be added, but don't expect too much. Just know that I tried.

Retrieved from "https://fantendo.fandom.com/wiki/Boy_in_Blue?oldid=1992361"
Community content is available under CC-BY-SA unless otherwise noted.