Bowser Koopa Junior, usually shortened to Bowser Jr. or simply called Jr., is Bowser's son, the sole heir to the Koopa throne, and more recently, the leader of a group of elite Koopas named the Koopalings. In his debut game, Bowser Jr. was tricked by his father into believing that Princess Peach was his mother, and Mario was attempting to kidnap her. However, after losing to the plumber, he confessed that he had known Peach wasn't his mother all along, but promised to be just like his father and help him fight Mario. Since then, Bowser Jr. has appeared in many more games, including spin-offs, and his importance to the Super Mario series cast has continued to grow over the years, essentially making him a main character.

Bowser Jr is a player on the Bowser Villains team on the multiplayer Wii sports game Mario Rugby League. He is a strong character, he has average speed and skill. His special skill is to shoot fire balls out of his mouth for an extended tackle.

Bowser Jr. appears as a second-player character in Goomsday Wii, wielding his Magic Paintbrush as a weapon. He seeks to regain the Koopa throne for his father, but cannot face the power of Goomboss alone. He is thus forced to team up with Waluigi and Shadow Mario. His Paint is an extremely useful mechanic in the game, being able to form bridges, ladders, restraints, and even disguises.

Bowser Jr. is the first boss of Super Mario World 3: A Galaxy Quest, he appears in his Koopa Clown Car, he also appears in Shadow Mario's disguise in the Onefarious planet.

He is overworked here, appearing the most out of all bosses, but not necessarily the toughest in his first boss fights. He is mostly seen teamed up with Alex, but can also work with the other Koopalings, considering he issues orders and is the only one who needs to be taken down in some of the all Koopaling fights. His attack pattern depends on whether he is fighting alone without his Clown Car or the other scenario's. With his Clown Car he tosses Bob-Ombs and tries to ram the player, but without the car he jumps, runs, and breathes fireballs. In the all Koopaling fights, he doesn't fight, but actually gives orders.

Bowser Jr. reappears in this game as the boss of Bowser Jr.'s Bomb Blow Castle, in World 8: Valley of Despair.

Bowser Jr. makes an appearance in Mario & Luigi: The Cosmic Duo. In the game, he acts as the tutorial boss, and attacks using weak fireballs.

Bowser Jr. is a featured Warrior in Super Mario Warriors. His weapon is the Clown Car and makes use of the Lightning element. He also has an unlockable secondary weapon in the form of the Darkness-elemental Paintbrush, which lets attack his foes with paint and transform into Shadow Mario.

Bowser Jr. appears in Mario Hoops 3-On-3 Switch as a playable character. He is a Speedy character type and his special move is Clown Cart Shot. He is a starter character. His default partner is Bowser. His team name is the Bowser Jr. Shells.

Bowser Jr. appears in Super Mario Spikers as a playable character, appearing as an Offensive-type Captain. During matches, he wears his bib over his face, and utilizes both his Magic Paintbrush and the Jr. Clown Car. He also wears spiked, orange chains on his arms and legs, and the Jr. Clown Car's rim also has spikes on it. His emblem is a silhouette of his face, and his theme is Hip Hop.

Bowser Jr. is the main antagonist of the Donkey Kong Adventure DLC of Super Mario 3D World Deluxe. He has stolen 7 Power Stars while Mario and co. were distracted with Bowser.

Bowser Jr. appears as a playable character in Mario Tennis: Heroes Vs Villains. Bowser Jr. is a defensive playing type having great range but low speed and power. Bowser Junior’s zone shots are Clown Car Slide (Bowser Jr. rushed forward putting himself further ahead then the car either forwards or backwards) and Clown Car Zoom (Bowser Junior’s Clown Car gains wheels as he zooms to the left or right). Bowser Juinor’s Special Shot is Exploding Clown Car Launch in which he launched himself in the air out of his car to hit the ball with a hammer. Bowser Juinor’s hero is Peach, and his Villian Special Shot is Shadow Mario Cage, where he uses his paint brush to turn himself into Shadow Mario and then traps Peach in a cage (she gets out a few seconds later). If Peach uses her Villian Special Shot Cancel the Cage will break immediately after the cutscene.

Bowser Jr. appears as a miniboss in Paper Mario and the Elemental Sages. He is encountered and fought for the first time in Dimble Jungle during Chapter 3 as the last defender before the clearing where the Emerald Leaf. He is not encountered again until Chapter 8, as the Noctems have been holdig him captive to keep Bowser and his troops in the Alliance, until he is freed by Mario. In the interlude between Chapters 8 and 9, he informs his father that Mario freed him, and, as infuriating as that is, they owe him one. In his final appearance, he, alongside Kamek, attacks Mario immediantly after Mario finishes battling his father and Kammy Koopa, the latter having been brought out of retirement to help Kamek train the new wave of Magikoopas from the Magic Ruins. After their defeat, he and the others flee, and are not seen again during the game. 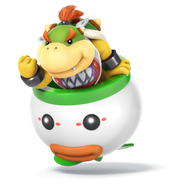 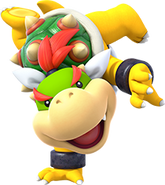 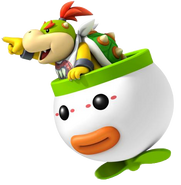 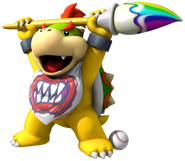 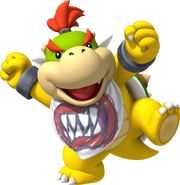 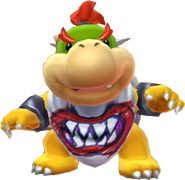 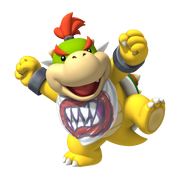 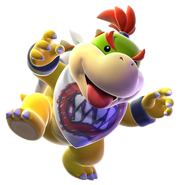 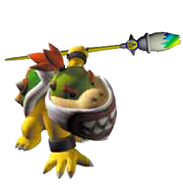 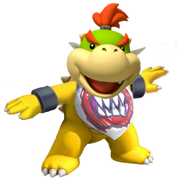 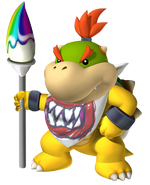 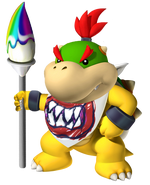 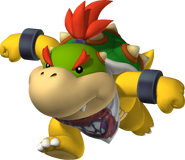 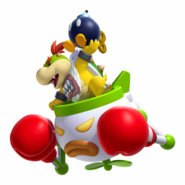 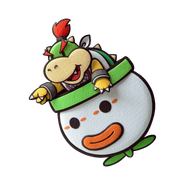 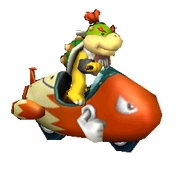 Bowser Jr. with his Bullet Bike, in Mario Kart Wii 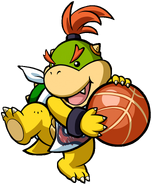 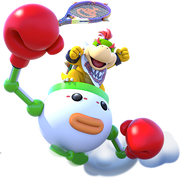 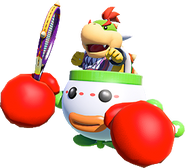 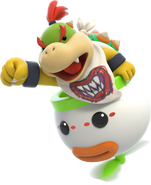 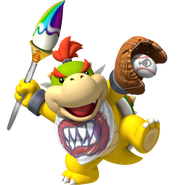 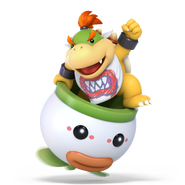 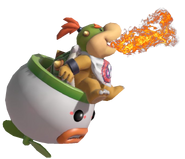 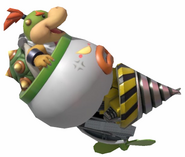 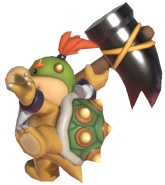 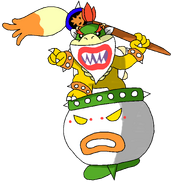 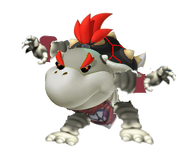 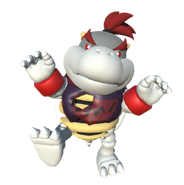 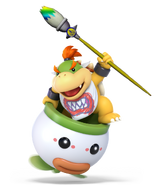 Add a photo to this gallery
Retrieved from "https://fantendo.fandom.com/wiki/Bowser_Jr.?oldid=3354896"
Community content is available under CC-BY-SA unless otherwise noted.