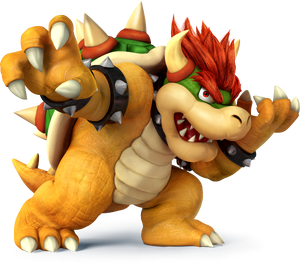 Bowser is a major character in the game Shadows of the Forsaken. He plays a relatively small role, first being met when the Avatar is asked (by Princess Peach) to convince him to join forces. He gives out a few quests, but many are part of side plots.

Bowser is the very large King of Koopas, with many similarities to the real-life Snapping Turtle. He towers above Mario and many others, with yellow scales and massive claws for hands and feet. He has a large, spiky, green shell with a white rim, and two horns. He also has fiery red-orange hair, spike bands on his arms and neck, and red rings around each of his spikes; his belly is a pale tan-ish color.

Bowser makes his life in his own castle, ruling over the Koopa Troop, living with Bowser Jr. and the Koopalings, and plotting to kidnap Princess Peach. He almost constantly surrounds himself with lava, and forces Mario to go through anywhere from six to eight zones in order to once again reach him. At some points in time, he has been more successful than others at being evil, but is sometimes only comically evil.

It is quite tough to get Bowser to ally the player, but it is possible by completing a quest titled The Missing Koopalings from him. Each level listed indicates equipment that he gains at said level; he will replace old equipment, but weapons and attacks merely provide alternatives to what he already uses.

Bowser has a plot to kidnap Princess Peach, but the princess will task the Avatar with putting an end to Bowser's plan, as their first test.

Bowser has but a single quest which can be taken: Find the Koopalings, which requires that the player locate each of the Koopalings (who remain scattered across each of the different areas withing the Mushroom Kingdom), and then chase down Dark Bowser.

Bowser serves as the very first boss players must face. Upon entering the throne room of Bowser's Castle, the torches lining the walls light up one by one, lighting a room in which the floor is surrounded by lava on all sides and the bridge behind the Avatar retracts. Something bursts forth from the far end of the room, and it is none other than Bowser, who slams into the ground in front of the Avatar and growls loudly.

Retrieved from "https://fantendo.fandom.com/wiki/Bowser_(Shadows_of_the_Forsaken)?oldid=2938951"
Community content is available under CC-BY-SA unless otherwise noted.