Bowser is the current King of the Koopas, and one of the most powerful enemies of the Mushroom Kingdom. He was raised from birth by his parents, the wicked Magikoopas, Kamek and Kammy Koopa, to be the greatest weapon of the Koopa race. He lived up to his parents expectations by uniting the various tribes and subspecies of Koopas into one grand kingdom, with himself as king.

Bowser wanted even more power, and set his sights on conquering the neighboring Mushroom Kingdom. With a secret ally in the dimensional visitor Waluigi, Bowser first gained the aid of the native Goombas, who had defected from the Mushroom Kingdom. When all was ready, Bowser launched a full-scale invasion of the Kingdom, and seized power when his army killed King and Queen Toadstool.

Bowser also took Princess Peach Toadstool captive, and held her as a prisoner in his own castle. Although he initially only saw her as a hostage to prevent reprisals, Bowser eventually fell in love with the beautiful Princess, much to the dismay of Kamek. Ultimately, though, Bowser's reign over the Mushroom Kingdom came to an end at the hands of the Mario Bros., who Bowser swore revenge on.

Over the years, Bowser has launched many attacks with the goals of either retaking the Mushroom Kingdom, laying claim to other lands, or killing his enemy Mario. Some of these schemes have included: assaulting the wild Dinosaur Land; imprisoning Peach within her own castle with the power of the castle's Power Stars; convincing his own son and heir, Bowser, Jr., that Peach was his mother, leading to his son's efforts to frame Mario for a pollution attack on Isle Delfino; using the mystical Star Rod to grant any of his wishes, and lifting Peach's entire castle into the atmosphere; teaming up with his own younger self to attack the Mario Bros.; and attempting to create his own galaxy, from which he would take over the entire Mushroom Kingdom universe.

All of these plots were eventually undone by Mario, Luigi, and sometimes other heroes, but Bowser's greatest personal success was when he was apparently married to Peach. This marriage was done at the orders of the shadowy Count Bleck, in order to create the Chaos Heart, which would have destroyed the multiverse if not for the efforts of Mario and his partners; hence, the marriage was by no means legal. However, Bowser stubbornly believes that he is now truly Peach's husband, much to the dismay of the heroes of the Mushroom Kingdom.

Although Bowser usually works as a force for evil, he has, on occasion, been pressured into working with Mario for the benefit of the Mushroom Kingdom. Usually, however, this is only because something else is working against Bowser or his plans: for instance, he teamed with Mario to defeat Smithy because the conqueror had taken over Bowser's own kingdom; and he only worked against Count Bleck to stop the destruction of the multiverse, which Bowser wanted to rule himself.

Once again, Bowser has been called upon to be a champion for good, working with the Super Smash Bros. against Doctor Doom and his Acts of Vengeance. However, this time, the enemy Bowser faces could be more dangerous than any he has faced before.

Having been infused with dark magic since his birth, Bowser possesses powers above many of his fellow Koopas. The most apparent of these are his enhanced strength and size, which he uses to overpower most of his enemies. Bowser is also equipped with razor-sharp claws, teeth, and horns, as well as a spiked shell which can stand up to the worst punishment.

Bowser is able to spew fire from his mouth, either as a full stream, or in short bursts as fireballs. Bowser's thick skin is immune to the intense heat of his own fire.

Although he prefers to use his own natural abilities in combat, Bowser has used several weapons on occasion. The most notable of these is his Koopa Clown Car, a flying pod-craft able to carry Bowser through the air, along with a small platoon of Mecha-Koopas, small robots in Bowser's image. Bowser has also used the throwing hammers usually used by the Hammer Bros., as well as steel gauntlets equipped with extended claws.

Bowser has been trained in the use of black magic, and is adept at such spells as summoning lightning, teleportation, and dark energy around his hands. However, Bowser is not as skilled with his magic as trained sorcerers like Kamek or Ganondorf.

Fire Breath (default): Bowser exhales a plume of fire on as many as three ground-based enemies, as long as they are close to each other. There is a 50% chance that the attack will set the enemies on fire, dealing damage for five rounds.

Koopa Claws (learned at level 10): Bowser swipes at a single ground based enemy with his claws, dealing damage to them. There is a 30% chance that Bowser will pick up and bite the enemy, piercing their defense and leaving them open to attacks for three rounds.

Whirling Fortress (learned at level 30): Bowser retreats into his shell and spins through a single ground-based enemy, dealing damage. There is a 30% chance that this attack will also boost Bowser's defense for four rounds.

Hammer Barrage (learned at level 50): Bowser throws five hammers at random enemies, dealing damage to them. There is a 10% chance that the hammers will leave an enemy stunned, preventing them from attacking for three rounds.

Koopa Clown Car: Bowser leaps into his Koopa Clown Car, which replaces his moveset with four new high-damage abilities. Bullet Bill Blasters fires four Bullet Bills at random enemies, stunning them and leaving them unable to attack for ten turns. Bob-Omb Run allows Bowser to fly over all ground-based enemies, dropping Bob-Ombs on them and setting them on fire, dealing damage for five turns. Mecha-Koopa Deploy summons a Mecha-Koopa to fight as an ally, lasting until the battle ends or it is destroyed. Big Steely drops a Big Steely which rolls over all enemies, ground-based or flying, stunning them for ten turns. The Koopa Clown Car lasts for fifteen turns or until Bowser is defeated, carrying over into other battles.

"Who are we tearing up today?"

"Let's get this over with!"

"More lambs to the slaughter!"

"Yeah, this just got a whole lot better!"

"Show me the chumps, and I'll bring the pain!"

"You call yourself a hero?!"

"Come on, I thought you were better than this!"

"If I knew you fell this easy, I would have joined the other team!"

"You wouldn't last a day in my army!"

"I take a licking, and I keep on ticking!"

"You can't fight without me!"

"What was I thinking when I joined these losers?"

"I'm always on the winning side, and you're not it!"

"I could get used to this!"

"The universe belongs to me, not to some wacko in a metal suit!"

"Hah! These chumps aren't worth it!"

"Let's see what this baby can do!"

"I always get the better toys!"

"Think it was bad before? It just got a whole lot worse!"

"I hope this thing holds together!"

"Don't fail me now, ya bucket of bolts!"

"That's coming out of your pay!"

"I just put a new coat of paint on that thing!"

"Thanks for the weapons testing!"

"That's what I'm talking about!" 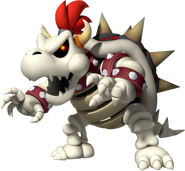 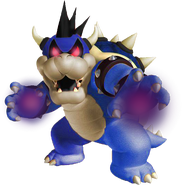 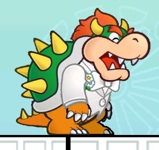 Wedding Bowser
Add a photo to this gallery
Retrieved from "https://fantendo.fandom.com/wiki/Bowser_(SSBD)?oldid=1600947"
Community content is available under CC-BY-SA unless otherwise noted.