Start a Wiki
Bowser (クッパ, Koopa) is a veteran in Super Smash Bros. Galactic Battle. Bowser, much like many of the returning veterans remains the same as he did within previous Smash games.

Unlike Ultimate, and the previous games before it, Bowser no longer uses the realistic voice clips that he had, instead, he now has voice samples recorded for Smash by his Mario series voice actor, Kenny James.

Bowser is also a starting fighter once more, unlike Ultimate.

Role in The Galactic Battle

Bowser appears at the start of the Story, crashing Peach's Castle with Bowser Jr., the Koopalings, and the rest of the Koopa Troop. He fights off Mario and Luigi in a tough battle but sends in the Koopalings to finish off the brothers. He then reveals that he is now working under Hearth, the Lady of Fire, and after giving an all-clear, watches as Hearth vaporizes the Mario Bros. with relative ease. He turns his attention to Peach and Daisy, and once again gives the all-clear for Hearth to vaporize both Princesses after Wendy's suggestion that both could bring trouble. Bowser then is seen leading his troop to vaporize the Mushroom Kingdom into flames for Hearth.

Bowser will appear as both an opponent and an ally in all variations of Classic Mode.

The Red One. Every Red One!

Bowser's Ultimate style Classic Mode is named, The Red One. Every Red One!, and features Mario then Metal Mario as the final opponent. Bowser's opponents are all wearing red attire, which is a reference to his mortal enemy (Mario) who wears red clothing. His penultimate battle is against Rathalos before the bonus round. It remains unchanged from Ultimate.

Bowser's Fighter Spirit can be obtained by completing Classic Mode. It is also available periodically for purchase in the shop for 500 coins. Unlocking Bowser in The Galactic Battle allows the player to preview the first spirit below in the Spirit List under the name "???". As a Fighter Spirit, it cannot be used in Spirit Battles and is purely aesthetic. Each Fighter Spirit has an alternate version that replaces them with their artwork in Galactic Battle. 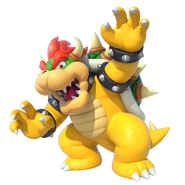 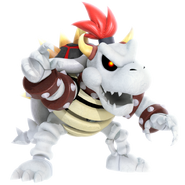 Dr. Bowser
Add a photo to this gallery

Retrieved from "https://fantendo.fandom.com/wiki/Bowser_(Galactic_Battle)?oldid=2991849"
Community content is available under CC-BY-SA unless otherwise noted.