Bowser is a playable character in Super Smash Bros. Calamity. Bowser is usually the primary antagonist of the Mario games, always kidnapping Peach just so she can marry him and rule the Mushroom Kingdom, but in some games he allies up with Mario and his friends temporarily to fight off greater evil than himself, usually willingly or unwillingly.

Bowser has his Melee/Brawl moveset brought back, with the exception of his jab, which is completely new, all the while keeping his aesthetics from SSBWU/3DS.

Bowser has a new victory theme, which now matches the one used in Project M.

Bowser is more heavier than he was last time.

Jab is a slash to a claw thrust, similar to one of his attack animations from Super Mario RPG, which deals more damage.

Up aerial is quicker, but weaker than it was last time.

Koopa Klaw's bite is his pummel.

Bowser's forward, back and down throw are changed.

Neutral special is changed into a simple fireball spit, which has knockback, but no capabilities of racking up damage and loses power when spammed.

Side special has a sourspot, which behaves similar to the Koopa Klaw slash. 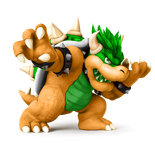 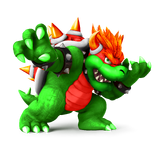 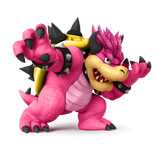 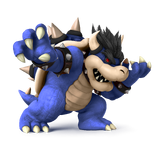 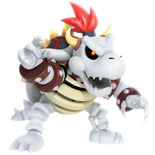 Add a photo to this gallery
Bowser has four alternate costumes, one of them turns him into Dry Bowser; the skeletal, undead version of the Koopa King, giving him blue flame aesthetics to his flame attacks. The same goes for his Meowser costume.

Retrieved from "https://fantendo.fandom.com/wiki/Bowser_(Calamity)?oldid=2567760"
Community content is available under CC-BY-SA unless otherwise noted.