Bowser: Quest for the New Empire is a 2.5D platformer Starring Bowser. The game is developed with the assistance of Nightcap Devs. for the Nintendo Switch.

Somewhere far away from the Mushroom Kingdom,another kingdom is located. This Kingdom is known as the Karasukai Kingdom. The residents of this kingdom can be seen minding their own business. All of the sudden,a bunch of cannon balls start flying towards the Kingdom and destroying a couple of the buildings. One resident looks at the sky and sees a bunch of airships closing in on their kingdom. These airships turn out to be Bowser's airships. Bowser is planning to conquer the Karasukai Kingdom and transform it into the Bowser Kingdom. Bowser and his airship fleet reach the Kingdom and Bowser jumps off his airship. He lands near the entrance of the Kingdom before letting out a roar.

This game plays like most 2D Mario games. Since you're playing as Bowser and his allies,you have a few extra abilities. These abilities include:

(Scroll 1-1) While nowadays these cannons are used for confetti,They were often used to combat an invading force years ago.

(Scroll 1-2) This giant Jingaza Statue can be found on top of the gate. Legend has it that when a big threat arrives,It'll come to life and protect the residents of the Kingdom.

(Scroll 1-3) Recently,some people have claimed to see faces in the colorful sky of the Kingdom. Some people have even said that these faces have come to haunt them.

(Scroll 1-5) Cannon Twhomps. They're not only useful for blocking enemies,but they will also fire at said enemies thanks to their cannons.

(Scroll 2-1) Every year,a heavy storm attacks the fields. Most people say that during this day,the rulers of the Kingdom are competing against each other.

(Scroll 2-2) Despite how dangerous it is,The people that live in the fields often look forward to the storm due to how many plants grow in the fields afterwards.

(Scroll 2-3) These floating objects were recently spotted flying above the Nokonoko Ricefields stealing some rice plants.

(Scroll 2-4) A couple of these Koopas were swimming in the rivers of the Ricefields. This close up was taken a few seconds before the photographer was dragged under the water.

(Scroll 2-5):Today were testing the new Koopa Kites. Come pay a visit to Nokonoko Fields if you want to catch some serious air time.

(World 3-1): The Sumo Twhomp. The Guardian of Mt. Dossun. The best Sumo Wrestler in the entire Kingdom.

(World 3-2): Closethwomps were originally built by a family of hammer bros to help the Sumo Thwomp keep his treasures from being stolen.

Scroll 3-3:"Orbs and Spikes...This won't be a hastle. With the help of Unibo's,we can defend the castle!"

(Scroll 3-4): These small plants are usually hidden beneath the grass and feast on the blood of those who battle on their ground.

(Scroll 3-5): During the Spring,Lots of Cheep-Cheeps tend to swim in the rivers of the Mountain. Bear Chomps can usually be found near the rivers during these times.

(Scroll 4-1): The swamp is filled with berries that are healthy to Pokios,but poisonous to humans.

(Scroll 4-2): Scuttle Snifits tend to lurk in trees. They use the Pokio berries to shoot down their enemies.

(Scroll 4-3):Do not hunt for the Pokios in this forest. Anyone who attempts to hunt in this forest will get a fine of 1000 coins.

(Scroll 4-4):"While waiting for someone to come save me,I had this monkey to keep me company. It seems he can eat these berries just like Pokios."

(Scroll 4-5): Prior to all the Poison taking over the swamp,This statue was build in honor of the Pokio Guardian. This mighty bird dedicates himself to protecting the animals that reside in the forest.

(Scroll 5-1): According to most fishers,Koi-Cheeps are very difficult to catch. As they often come in groups and seem to be immune to a lot of attacks

(Scroll 5-2): After a lot of training,Koi-Cheep tend to transform into this giant dragon.
Add a photo to this gallery

These stages can be found in a couple of levels and can be used to earn a bunch of 1-Ups.

The Logo of the game. 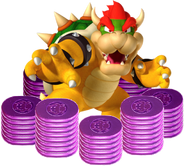 Artwork of Bowser surrounded by his Coins.

A render of a Jizo Statue found in some levels.
Add a photo to this gallery

The world map of Tsukkun Swamp.
Add a photo to this gallery

Retrieved from "https://fantendo.fandom.com/wiki/Bowser:_Quest_for_the_New_Empire?oldid=3214648"
Community content is available under CC-BY-SA unless otherwise noted.