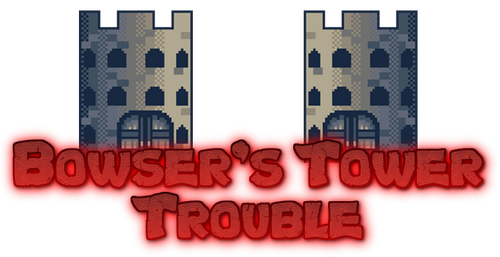 Bowser's Tower Trouble is a tower defense game for the Nintendo Switch developed by Crash Co. It is notable for being the first tower defense game in the Mario series, as well as the first game to star Bowser since Mario & Luigi: Bowser's Inside Story. In the game, the player takes control of their Mii who Bowser hires to make sure Mario and co. do not reach Bowser's Castle after he steals Peach.

Bowser's Tower Trouble is a tower defense game. As the player's Mii, deemed Captain Mii, they will need to place different enemies across 2D Super Mario levels to prevent various Marios, Luigis, Yoshis, Toads, etc. from reaching the Flagpole at the end of the level. Bowser will give the player a certain amount of money to buy Towers, and place them on the level. Every Tower has special attributes that allow them to be more effective when placed in certain spots. For example, Goombas move back and forth, and as such are more effective in areas with no gaps, and Cheep Cheeps swim in water, making them more effective when Mario and co. must swim. Players are given 45 seconds on the start of each level to set up their initial line of defense. After this, Mario and co. will begin appearing, and will not stop until the level is cleared. Players must then add in Towers as the level goes on to account for more enemies appearing, as well as upgrading existing Towers to make them more effective.

Marios, Luigis, etc. are also able to take out Towers, and will attempt to do so more often as the game progresses in difficulty. As such, players must be smart about where they place their Towers. They must also watch their money. After defeating an enemy players will get a certain amount of money depending on their abilities, which must be used to buy more Towers and upgrading Towers already placed.

Placing Towers is very similar to placing enemies in Super Mario Maker. Towers are selected from a row on the top of the screen, and are separated into several categories. Towers also have Alternate Variants, accessed by shaking them, much like some Course Elements in Super Mario Maker. They have no differences in gameplay and are purely cosmetic.

Bosses, unlike Towers, cannot be purchased with money. Instead, special Bowser Coins are rewarded for beating levels depending on how well they do, which can be used towards purchasing Bosses. They do not upgrade like regular Towers. Instead, by placing enough Bosses players are able to unlock their Final Boss variant, which is stronger.

Retrieved from "https://fantendo.fandom.com/wiki/Bowser%27s_Tower_Trouble?oldid=2686951"
Community content is available under CC-BY-SA unless otherwise noted.