Bowler is a character introduced in Super Wario Odyssey. She is a Bonneter that is forced to possess Wario's hat and allows him to transform him into various things when thrown at. She can also be used as a projectile or as a platform to jump off.

Bowler's appearance is a black bowler hat with a black bow wrapped around it, with her yellow eyes surronded by a black band with with two eye lashes sticking out. Underneath the hat is a white ghostly body. She floats above and can shift her shape into whatever hat Wario desires, being usually seen as Wario's trademark yellow cap.

Bowler is able to possess enemies and objects through a method known as Capture, although she cannot do this to enemies or objects wearing hats. If a enemy is wearing a hat, it must be knocked off first. She can also be thrown as a projectile and be used to collect currency or coins, although she cannot collect Power Moons. She can also be used to boost Wario's jump when Wario throws him and then jumps on top of him, doubling the distance and height of the initial jump. Bowler can also talk. Wario has the unique ability to charge her for greater distance and to ricochet off walls and floors. As such, she gets the unique title of the "strong hat ghost".

Bowler is more or less forced by Wario to work for her, although in exchange for her service he will pay her 5% of what they find in treasure. Bowler warms up to Wario during their crash to Amber Glade in Cascade Kingdom although tends to be rather snarky.

Bowler makes her debut in Super Wario Odyssey as Wario's new partner and a major mechanic. She extends his movement as well as let him capture objects and enemies. She is forced to work alongside him, but warms up to him over the course of the game.

Bowler reappears as Wario's partner with the same mechanics she had in Super Wario Odyssey. She can now capture stuff that Peach, Luigi, and Mario had seen previously in their odysseys.

Bowler appears as a NPC in Super Speedstar RPG, appearing in Chapter 6 of the story and can be visited in Bonneton after the story mission there. She was attempting to steal the yellow Chaos Emerald, but Sonic was much faster than her in obtaining it.

Bowler appears in the beginning of levels in Wario Land: Hunt For The Ring. Wario can pay her to Capture a enemy, which has it's own lifebar. If Wario fails, he must pay her again to Capture the same enemy.

Bowler appears as a non-playable character in Super Mario Galaxy 3 in the Bonneter Galaxy, who can be interacted with, though her dialogue changes when you are playing as Wario.

Bowler is a playable character in Super Mario Spikers. Like all Bonneter characters, she is possessing a enemy, namely the Polluted Piranhabeak that was introduced in Super Wario Odyssey. Her Special Spike is Polluted Bowler, which makes her encase the ball to send it over to the opponent's court, and her Special Attack is Goobies, which allows her to create a swarm of Goobies to jump onto opponents and slow them down.

Bowler appears as a unlockable racer in Mario Kart: V² Circuit. Like the rest of the characters, she can be unlocked randomly by placing first in a Grand Prix on any engine class. Alternatively, she can be purchased at the shop by collecting Coins. She is a lightweight with a large size. She has good speed, poor acceleration, good handling and above average traction. 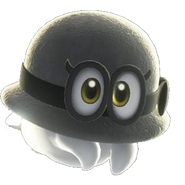 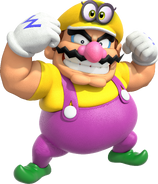 Wario with Bowler on 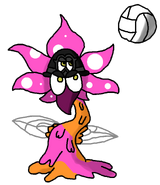 Bowler in Super Mario Spikers
Add a photo to this gallery 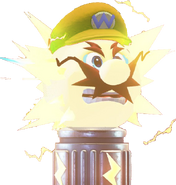 Wario as a ball of electricity (Spark Pylon) 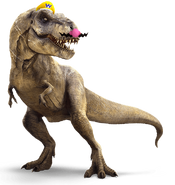 Wario as a T-Rex

Wario as a Stegosaurus

Wario as a Goomba

Wario as a Metal Goomba 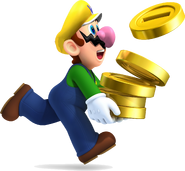 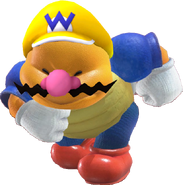 Wario as a Chargin' Chuck 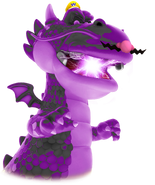 Wario as a Thunder Draggadon

Wario as a Pirate Goom 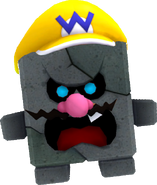 Wario as a Whimp 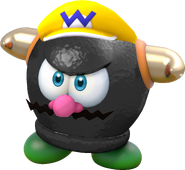 Wario as a Bully 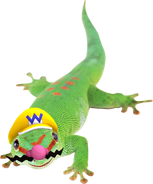 Wario as a Leapin' Lizard
Add a photo to this gallery

Retrieved from "https://fantendo.fandom.com/wiki/Bowler?oldid=3210646"
Community content is available under CC-BY-SA unless otherwise noted.