Bowie Davis the Teddy Bear is the main protagonist of the BowieQuest series and serves as the mascot for TimeStrike. He is the sheriff of the Western Village, a ghost town found on the western end of the Buonarroti continent on the planet Stitchonia. He is envisioned by his tribe and local inhabitants as one of the most honorable heroes of all time due to all the evil schemes he's thwarted over the years, and he is noted as the one true counter to well-known wrongdoer Endal the Monkey. He has a wife known as Anna and raises a deputy-in-training known as Smith.

He first appears in BowieQuest.

Bowie is a stitched-up limegreen teddy bear that's wearing some standard sheriff attire, wielding his signature emerald badge on his vest's lefthand side. Though significantly more detailed than most other teddy bears in due to his semi-complex clothing and number of crimson stitches, he is still just as fluffy and squeezable as any other, and he's additionally very lightweight. His mouth is stitched up due to a successful revenge plan his greatest rival (Endal) set up against him, which therefore renders him unable to speak. Though he rarely does it, he can lift the bandanna from his neck up to cover most of his face's lower half.

Though Bowie puts up a stern, adult demeanor on the surface, he is anything but merciless and truthfully just cares deeply for his friends, protecting them with all his might. It can be tough to decipher what Bowie's truly saying as everything he says is muffled behind his facial stitches, but he's mostly got nice things to say about his family and several butt-kicking remarks reserved for his enemies. He is very friendly with his family and spends lots of time with them whenever possible, though he may occasionally be alienated by their increasing love for gadgetry and whatever as he isn't interested in the technology dominating the planet for the worse.

That said, Bowie is easily frustrated when it comes to discussions and arguments, as because he is silent much of the time, he can almost never win any fight by vocal means. It can also be really hard to tell what's on Bowie's mind, which can make cooperation with his friends challenging at times. But rest assured- Bowie is friendly and tries to get along with everyone he can, as he loves the friends he's got and loves making more... he just wants to keep his friends safe from fiends like Endal.

In commercials and ads, it is very clear that Bowie is a non-judgmental type, as no matter what weird thing occurs on screen, he ignores it and gives it a thumbs up (unless it's unquestionably morally wrong, in which case he is shocked and horrified).

Bowie is a lightweight fighter that rounds upon his enemies and makes space for himself by using his rope, which he can easily brawl and lasso with. This rope can be used to snatch his enemies and squeeze them to dish out damage or to otherwise suplex them into the floor or into walls. He can also lasso items from a distance over to himself for his own personal gain. Bowie can also fling out a number of sheriff badges as projectiles, which can stick to walls and form a ladder for the sheriff to climb. Being light as he is, Bowie is also quite agile and can move about quickly with ninja-like movements. He is also capable of jumping between walls and performing a downwards stomp.

Bowie is known for being the most well-rounded of his friends, never being too frail nor too sturdy, never being too weak nor too strong. Though lacking in strengths that could let him win a match in no time flat, he lacks glaring weaknesses as well, making it difficult if not impossible for Endal and his other rivals to exploit his weaknesses. 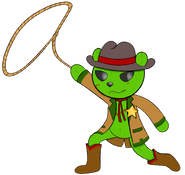 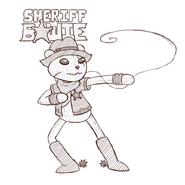 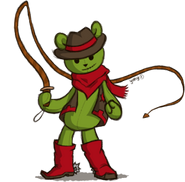