Start a Wiki
“Looks like we got some trouble on our hands. Well, it's not literally in our hands, it's actually in front of our eyes...eh, what the heck.”
— Bowie
The Original Bowie, known sometimes in certain crossovers as Classic Bowie, was the main protagonist of the initial BowieQuest game lineup, just like his modern counterpart, but is significantly different from him. He was a talking toy known for his recklessness and irresponsibility, often leading his Western tribe into trouble whether he meant it or not. He had ground powers, a unique ability among his family members, and specialized in utilizing planet-quaking abilities. Unlike his modern counterpart, he had a ridiculously cruel past, whereas he slaughtered all of Endal's kind in a planet genocide and has been hunted down by Endal and the last of his kind ever since. Good thing this Bowie still isn't around, or he might have become the next edgy serial killer character!

This character, like his new counterpart, is free to use.

Bowie is carefree and always strives for freedom regardless of the circumstance. He is usually good-tempered and jolly, unlike most adventurers, able to handle his enemies with a wicked smile on his face. Bowie is often seen bro-fisting his family members and high-fiving them whenever they put down some bad guys. When evil runs amok on his planet, he pretends to be surprised and rolls right into the action no matter what consequences could be coming his way. He is often noted to be reckless and irresponsible, almost never cleaning up after himself even though his policy is to keep his home planet clean. His attitude only really changes when he's around Endal, which is when he gets serious and actually aggressive. He is reported to have a wicked grin whenever he slaughters a monkey dead.

In the original BowieQuest series, Bowie is generally kind and nice, but outside of that series, he is noted to be a much darker character. This can be explored in the edgy "The Fandraxorcist" series, especially through The Reminder. Please don't read that.

They treat each other like brothers.  They have many adventures together, and they share very similar personalities.  Both view their cultures differently, though.

Flare is a hot-head, but the two get along nicely.  They travel very well together, and they have shared very similar feelings on their lives, to the point where the lives are fairly similar.

She is a greedy teddy bear, but she likes her father greatly.  She askes Bowie to get her lots of things, and Bowie isn't very happy about it.  But he does it to avoid a possible house tornado.

The two have a tough sibling rivalry, but the two pair together very well in a crisis.  Even though they almost never see eye to eye, they share the feeling that Endal is insane.

The two seem to be neutral to each other most of the time, although Oscargen never enjoys the discipline he receives when he's acting naughty.  Oscargen uses his genius to help Bowie out a lot, however.

Endal is Bowie's main enemy.  Believing that Bowie killed off most of the monkeys in his tribe in a previous war, he's tried to kill him from time to time.  The teddy bear in green always defeats him, though, and that drives him crazier game after game. 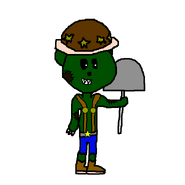 A concept of Bowie.

Another concept of Bowie. 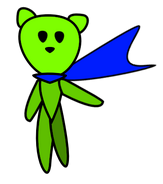 New artstyle test by Crimson; Bowie artwork based off of Jake's

Bowie (and Endal) by Soup. 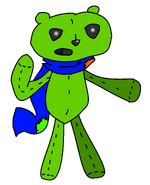 As Bowie appears in BowieQuest (ACL). Also his appearance in Brawl of the Fandraxonians and its sequel. 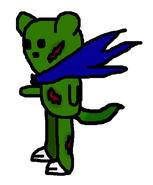 A small practice design by Crimson

Bowie as he appears in the Adventures of White series. 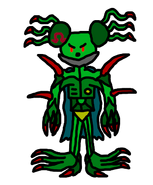 Bowie's "reincarnation" from an upcoming project

ew
Add a photo to this gallery

Retrieved from "https://fantendo.fandom.com/wiki/Bowie_(Original)?oldid=2762940"
Community content is available under CC-BY-SA unless otherwise noted.