A Boss Bass is a large carnivorous Cheep-Cheep with close eyes and a large front tooth. Its first appearance was in Super Mario Brothers 3. It reappears in Lets-a-go, Mario and Ultra Mario World. It has a female counterpart called a Big Bertha. The modern enemy Cheep-Chomp seems to have replaced it - though Boss Basses hunt on the surface and are red or orange - and occasionally green. Cheep-Chomps hunt underwater and are purple.

He was going to appear in Super Blob Bros as a boss. But he was scrapped along with Birdo and Dry Bowser.

Boss Bass reappears for the first time in a while in Lets-a-go, Mario. It acts just like it did in Super Mario Bros. 3. However, it has a new and potentially more dangerous sub-species in this game, Snow Bass, which cannot jump, but can spit snowballs at things, freezing them. 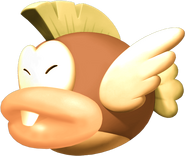 A Boss Bass on Banshee Boardwalk

A Boss Bass in Lets-a-go, Mario
Add a photo to this gallery
Retrieved from "https://fantendo.fandom.com/wiki/Boss_Bass?oldid=2938771"
Community content is available under CC-BY-SA unless otherwise noted.