Start a Wiki
Booster is a main character in the Bombell series. Booster is Bombell's first and best friend. He's a light blue Boo and is very smart, shy and serious, unlike his friend. Booster owns his own laboratory, where he lives and makes experiments and other stuff.

Booster is a light blue Boo. He looks like normal Boos, but he has green hair, sad (sometimes happy) eyebrows and a small mouth. He also wears a small green bow tie.

Booster debuts and also is one of the main characters and heroes in the game Bomb Frenzy. In the story of Bombell, when Bombell met him and went with him to his laboratory, he took one of Booster's potions and accidentally splashed it on him, giving him his explosive powers.

Booster, along with Bombell, Bombella, Stanley and Benjamin, appears as a Downloadable Playable Character in Super Mario Smash Bros.

Bombell is Booster's first and best friend, and viceversa. They both are very friendly and often play together. Booster and Bombell became friends when he met him in the forest. Bombell was alone and sad after he leave the mansion. They both talked and became best friends.

Bombella and Booster are seem to be good friends, she's maybe his best and first female friend. 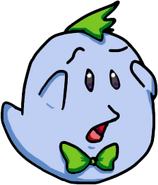 Bombell and Booster's overworld sprites.
Add a photo to this gallery
Retrieved from "https://fantendo.fandom.com/wiki/Booster_(Bombell_series)?oldid=2029515"
Community content is available under CC-BY-SA unless otherwise noted.