This page, Boolala, can only be edited by STM (t∣b∣c), only edit if you find a spelling error otherwise, Continue reading Boolala.

“You'll pay for this king boo... it it's the last thing i doo i'll make you pay for this!”
— Boolala, after King Boo kills her parents.
Boolala (ブーイング'ラ, Boola) is a female red/pink boo from the Boolala series, Boolala has magic powers and was combined with a Poison Mushroom as a young teen.

Boolala was an normal boo until one day, she got an invitation to a party, like for most teens, a party is the best place to hang out so she dicieded to go. When she arrived no body was there, she waited for a few minutes before leaving, on her way home she took a short-cut through the woods, as she wondered through the woods King Boo was planing to create the ultimate boo, he needed a test subject and kidnaped Boolala, after the experiment, King Boo realised that it had backfired and that Boolala still looked the same, but she had a purple tongue and purple eyes too, she also had the ability to poison things and spit balls of toxic waste. Boolala returned to her home at Mt. Boo only to find it in ruins, Boolala swore vengeance and promised to track down and kill who ever did this.

Boolala was always trying to make new friends when she was a normal boo, but when King Boo transformed her into a strange poisoned boo, she became bitter sweet, trusting only the friends she knew as a normal boo. Boolala loves music and has her own dance club, Boolala's Boogie House. Her friends call her Boola (as a reference to her Japanese name) and her favorite color is purple.

Boolala is a pink/light red boo with a purple tongue and eyes. She has two teeth rather than the usual four, she has a purple bow on the right side of her head and she has been shown to have a small purple purse. She is slightly larger than a normal boo.

Boolala stars in her own game of the same name. Boolala is the players default character and has the highest stats of all characters in this game. 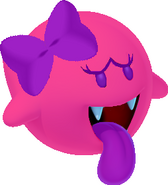 Boolala's beta 3D art
Add a photo to this gallery
Retrieved from "https://fantendo.fandom.com/wiki/Boolala?oldid=2376087"
Community content is available under CC-BY-SA unless otherwise noted.