Boohemoth is a Giant Boo who first appears in New Super Mario Bros. 2. They appear in Ghost Houses. They mainly act like Boos but, if Mario looks at them to long they will peak out and slowly move towards Mario.

Mario and Sonic at the Dream Olympic Games

Boohemoth appears as an unlockable character in this game.

Boohemoth appears as a boss in this game, he is the boss of the Boohisis planet, his weakness is Draglet Mario.

Boohemoth appears as a hazard in the track Boo Library. Interestingly enough, there are two. They patrol the split pathway on the course, appearing inbetween the gaps. They pace back and forward and send Boos after karts that grab their attention, which steal items or cause opponents to spin out. 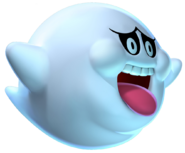 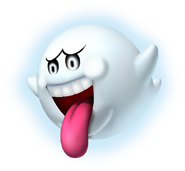 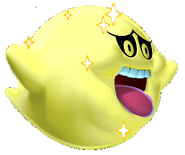