Boo Mario is one of Mario's Power-Ups that first debuted in Super Mario Galaxy. Upon touching a Boo Mushroom, Mario will transform into a Boo (while retaining his original facial features and cap). As a Boo, he will be able to perform any action that the ghostly enemy normally could, namely turn invisible to pass through grates (in a manner not dissimilar to the Vanish Cap from Super Mario 64) and levitate. Interestingly, Boo Mario will attract other Boos, and he can use them to perform various deeds in order to progress in levels.

Unlike most of Mario's other power-ups, which are lost when Mario is damaged by an enemy, Mario can revert from his Boo Mario form through a variety of different methods; this is due to the fact that Mario can not actually be harmed by other enemies while in this form. Mario will revert back to normal should he enter a lighted area, touch water, or touch a Launch Star. 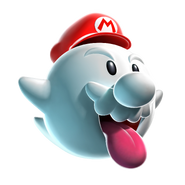 Add a photo to this gallery
Retrieved from "https://fantendo.fandom.com/wiki/Boo_Mario?oldid=2750558"
Community content is available under CC-BY-SA unless otherwise noted.