In a galaxy far far away...

After a long absence, they make a reappearance in Super Mario Galaxy 4 as enemies. The enemies are low in HP but has high FP.

Also in "Mario and Bowser 2 War!" Thay guard The Dry Bones King and stop Mario from getting the toads.

Bony Beetle joins the battle in Mario Super Brawlers. In the game, he is a feather-weight. For some reason, he always remains in his "spike" form. 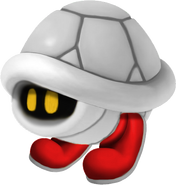 New Super Mario Bros. U
Add a photo to this gallery
Retrieved from "https://fantendo.fandom.com/wiki/Bony_Beetle?oldid=2844375"
Community content is available under CC-BY-SA unless otherwise noted.