Bonus Medals are items in the Mario series. They debuted in Super Mario Run in it's Remix 10 mode. There are three for each of the short courses, although there are five in Special and Secret Courses.

They do somewhat resemble rainbow-colored Star Coins, but with a more octagonal rim in place of a round one.

Collecting Bonus Medals fills up the gauge for the Bonus ? Block, which can unlock rare objects for Kingdom Builder. In Super Speedstar RPG, they were instead used to boost a single stat for any character.

Bonus Medals reappear in Super Speedstar RPG, with ten in each major area of the map and four in secret Opal Pipe areas. They are used to boost character stats by 1+. 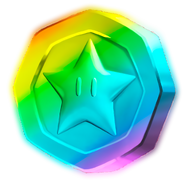 As it appears in Super Mario Run.
Add a photo to this gallery
Retrieved from "https://fantendo.fandom.com/wiki/Bonus_Medal?oldid=3185541"
Community content is available under CC-BY-SA unless otherwise noted.