The Bone Flower is a flower which turns Mario into Bone Mario, where Mario can attack enemies with bones.

The Bone Flower has three distinct appearances, all three share the same function although differ in appearance somewhat.

The original Version of the Bone Flower appears to look like a Fire Flower where the Red and Yellow have been replaced by two shades of Grey. It also posesses a stylized Leaf Design

The second iteration appears similar to the first although uses a single shade of Grey and is a bit darker. In addition there appears to be holes that cut through the flower and into the flower.

The New Version changes the Flower's appearance drastically having it instead have a Skull for the main body, the Skull is Dark Purple in colour and has pitted eyes that glow Gold. In addition the Skull's teeth also glow gold. The Stem appears to look more like a Blue Spine that gets darker towards the bottom. It doesn't have leaves instead having two T-Shaped Bones instead. This may be to replicate what the Leaves basic shape is. 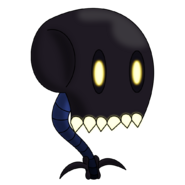 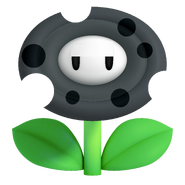 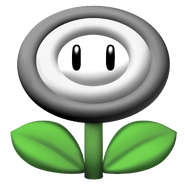 The Original Bone Flower
Add a photo to this gallery
Retrieved from "https://fantendo.fandom.com/wiki/Bone_Flower?oldid=1957219"
Community content is available under CC-BY-SA unless otherwise noted.