"Bombyx Icarusiot" is an "made for market" heroine meant to replace Unten during the events of A Flash Beorn Our Eyes. She was "created" by A22 Enterprises via gene splicing with a moth.

Bombyx is a pale skinned woman with dark brown hair. She has antennae that stick out from her hair. She has brown eyes. Her hair is done up in a ponytail with a white band made from cocooning fragments.

She has white fluff surrounding her neck and wears a white and brown dress with A22's insignia inscribed on the front. Her fingers are a little claw-like in form. She wears pantyhose and mechanized boots that go up to her thighs that are also inscribed with A22's insignia. She has a enlarged pair of moth wings on her back that allow her to fly.

Bombyx is very child-like when it comes to her understanding of the world and has stunted emotional development. She gets very excited easily and sometimes cries when things don't go her way. She often does not consider the weight of her actions before doing them. Despite this, she desperately wants to be seen as a good person and does her best to be seen as such, amending any bad blood she might have with others.

Bombyx is affiliated with A22 and considers the people she knows there good people. She doesn't know or possibly understand the more seedy parts of A22 as a whole (for instance, she doesn't really like Master Binary because she perceives him as a person trying to stifle Bondi's vision of A22 as opposed to disliking any of the terrible things he's done) and hates when she hears bad things about A22.

She is obsessed with becoming a hero and saving people but as she's never had any non-simulated experiences with heroics, she has unrealistic expectations and ideas about this. Despite this, Bombyx isn't selfish and will do the right thing even at her own expense, as she sees as part of being a hero.

Bombyx and her brother Basil were inducted into A22 at young age because their parents were scientists at A22. They were sent to the "Lion's Den", a genesplicing lab at A22. Although Bombyx was a success, Basil went insane and killed their parents. Bondi Carbine, the head of the project, took it upon herself to take care of Bombyx and to rehabilitate Basil. Bombyx never knew about the accident and was told a lie to explain her brother's circumstances and Bondi, in fear that she would become insane. As such, she has been sheltered and lied to because A22 is afraid of what she could become otherwise.

Bombyx has the ability to fly via her moth wings and can grow them back over the span of four hours. She has nuclear infused breath which is powerful enough to melt through steel.

Additionally, she can eat woolen and silk objects with no adverse side effects. She happens to like the taste too. She is a terrible cook to a supernatural level, such as the time she tried to cook for Unten to apologize for trying to take over his job; said cake was mistaken as a rock and was a fire hazard.

First appeared in Part 2 as A22's attempt to replace Unten in what was more or less an extremely dangerous marketing campaign. Bombyx took on A22's SPHERO robot but was shot out of the sky when her wings caught on fire. She later tells Unten and the group it's weakpoint.

Her adoptive mom who shelters her too much and often lies to her; all in the defense that she doesn't want her to become insane like her brother. Despite the deceit, the two genuinely do have a very close relationship.

Her biological brother who has been the subject of sanity rehabilitation. Basil finds her too sickeningly sweet to be around, but Bombyx just wants to be friends.

Since A Flash Beorn Our Eyes, Bombyx has shown nothing but respect for him and often asks for tips how to become a hero like him, which don't ever leave A22's email servers. Bombyx attempted to even make him a cake, which was a big disaster. 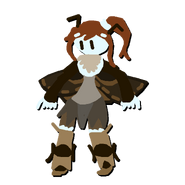 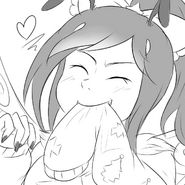 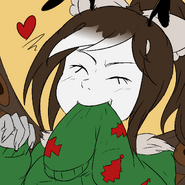 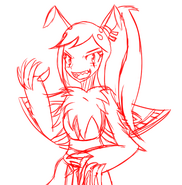 Bombyx from Series 5 of Face Off!