Bombshell Bills first debuted in Paper Mario as an enemy. They are fired from normal Bill Blasters, but while they have the same sprite as normal Bullet Bills they have a yellow colorized effect. They only appear in Bowser's Castle.

Bombshell Bills returned as an enemy that is only fought in the Shadow Palace. In the overworld, they are fired from Bombshell Bill Blasters that often guard doors in hallways of the final dungeon; in order to get past them Mario must use his Paper ability. 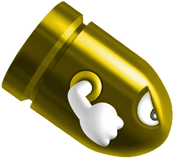 A Bombshell Bill from Paper Mario: The Thousand-Year Door.
Add a photo to this gallery
Retrieved from "https://fantendo.fandom.com/wiki/Bombshell_Bill?oldid=2913815"
Community content is available under CC-BY-SA unless otherwise noted.