Start a Wiki
“I have a little score to settle with those Koopa Bros.!””
— Bombette, Paper Mario


Bombette is a pink Bob-omb and Mario's third partner in Paper Mario. She and Mario were captured by the Koopa Bros. and after being rescued by Mario, she joined his team. She is now the supposed love interest in Jerry.

She briefly appears in the upcoming game with Jerry at the end. She seems to be laughing at a joke Jerry had told her.

In the upcoming game, (Name pending) she is Jerry's supposed love interest. Like Yoshi with Birdo, Jerry is always trying to impress and defend her. In the end, she and Jerry share a short kiss. 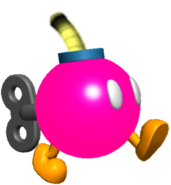 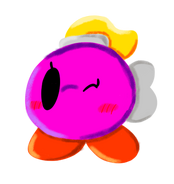 3D render of Bombette.
Add a photo to this gallery
Retrieved from "https://fantendo.fandom.com/wiki/Bombette?oldid=2753794"
Community content is available under CC-BY-SA unless otherwise noted.