Bomberman - Do It Yourself (also named as Bomberman DIY or in Europe: Bomberman 3D Touch) is an upcoming 2014 3DS game developed by GreenStar Studios, with the cooperation with Konami and licensed by Nintendo, and published by Fantendo.There's a plot or story confirmed. In this game, the gameplay is very similar from all Bomberman series, with player's co-op. But it's also added a stage editor with objects and unlockable content, also DLC at the Nintendo eShop. This game also requires Wi-Fi from the Nintendo Network; it allows you to play against the world or send/download stages at Bomberman DIY Channel.

Bomberman, beter named as Cheerful White, is taking a nap on the grassland by taking a good shine of sun. Suddenly, pieces of destroyed metal are falling off the sky. What are these things? They are pieces of buildings into the planets. Someones blew and destroyed this and it is not a good one...

The gameplay is very similar to the Bomberman series. Otherwise of that, you must help Bomberman to place bombs and move movable, carryable and dangerous objects and blocks. To do that, you must press at the object or block with the touchscreen. It seems easy but it's also frustrating.

In this mode you can make your own match with your own ruleset to play against Bombermen. Also there's a Story Mode where you can go on adventure by facing levels and bosses. There you can chose with character do you want to go on adventure: White, Black Bomberman or your own Mii. An achievement room is also in this game if you cleared a challenge if demanded.

An another mode that you can play is the Construction Zone. It allows you to create your own stages and share it to Bomberman Channel. Standard objects and blocks are already unlocked but there's more to unlock, by clearing worlds, special stages, BomberPoints, etc.

In Online Play, you can play against the world or in your land. You can also play with teams. How more you win, more BomberPoints do you have.

Only with your Mii, you can change outfits to display them during your battles and in Story Mode. 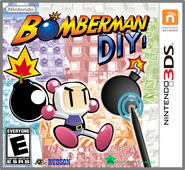 American Boxart of this game

European Logo of this game. 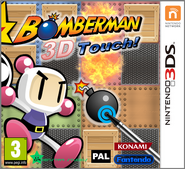 European Boxart of this game. 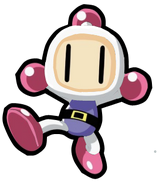 Bomberman's official artwork of this game.
Add a photo to this gallery

Retrieved from "https://fantendo.fandom.com/wiki/Bomberman_-_Do_It_Yourself!?oldid=2399568"
Community content is available under CC-BY-SA unless otherwise noted.