Bomber Bro. (also known as Bomb Bro.) is a sub-species of Hammer Bro. that shoots Bombs, using the same powers of Bomber Mario and Bomb Mario.

Bomber Bros. made their debut in Super Mario World: Wii as a new enemy in the mario series.

Although they aren't called Bomber Bros., their clone, the Bomb Bro. makes an appearance in this game.

They reappear in Lets-a-go, Mario, known again as Bomb Bros. In this game, they wear purple helmets and shells, instead of black armor. The bombs they throw explode on impact with the ground or any other solid surface. If they are caught in mid-air, the bomb can be held for a bit of time and thrown, a key to solving some of the game's puzzles.

Bomber Bros. make their second appearance in this game. In this game, they throw Bob-Ombs at Mario that explode if they touch him. The Bob-Ombs can actually be picked up by Mario and thrown back at them. 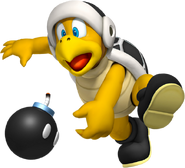 A Bomb Bro., as it appears in New Super Mario Bros. DX.
Community content is available under CC-BY-SA unless otherwise noted.
Advertisement