Fantendo - Game Ideas & More
Register
Don't have an account?
Sign In
Advertisement
in: Sysop Approved, Free to use Characters, Characters,
and 16 more

Bombell (爆弾鐘 in Japan, which means Bakukane) is a Boo, a fusion between a Bomb Boo and a Bob-Omb that is the main protagonist and hero of the Bombell series. Bombell's main goal is to help anyone who is in danger and save his homeland from being attacked, which makes Shadem his arch-nemesis in the series since these are his plans. Ever since he turned into a hero, Bombell became sure of himself and has gotten real friends that will help him on his quests. Since his first appearance, Bombell has appeared in several Fantendo spin-off games.

Bombell was a normal, little Bomb Boo, who didn't know how to use his explosive powers. The other Boos just made fun of him, and he eventually left the mansion.

A few days later, Bombell met a very shy and smart Boo, called Booster, and they became best friends. Booster went to his laboratory with Bombell to show him some of his experiments. While Booster was distracted, Bombell took one of the potions. Booster saw Bombell with the potion and shouted him not to touch that. However, this caused Bombell to accidentally drop the potion, sprinkling on him. When Bombell awoke, he noticed he was different, he was bigger and he felt stronger. Now, thanks to Booster's potion, Bombell was explosive and had stronger powers than any normal Bomb Boo.

Bombell was very depressed when he was a regular Bomb Boo. He was easily frightened of everything and was very shy and somewhat awkward. All of this was due to how bad he was treated by the other Boos in the mansion, as they just made fun of him for being timid, coward and weak.

When Bombell got his transformation, he somehow got a very kind, funny and friendly personality. He's also brave, curious, adventurous and heroic. Bombell loves to help anyone who is in need, and has great friends now who help him on his adventures.

Bombell is a dark grey, almost black, Boo with yellow eyes and teeth, just like other Bomb Boos. However, he also has yellow lines around him and a yellow fuse, like Bob-ombs. He's also slightly bigger than normal Boos.

Bombell makes his debut in Bomb Frenzy as the main protagonist and hero. His mission is to save the Mushroom Grasslands from his evil arch-enemy, Shadem and his Bombx. His story comes from this game, and here is where he meets his friends that will help him in his adventures.

Bombell is confirmed to appear in Mutant Riot as a playable character. Not much is known actually.

Bombell appears as a Downloadable Character in Fantendo Fight Fest!. His Finisher attack is the Explosion. With it, Bombell explodes, destroying the stage and enemies.

Bombell appears in Super Smash Bros. Demigod in Fantendo DLC along with another Fantendo characters. His moveset:

According with eShop description of Fantendo DLC, Bombell enters in Demigod's Tournament to become a living Boo.

Bombell appears in Omega Summit as a boss, since he's controlled by the Troll/N00b forces, as well as other Fantendo creations.

Bombell apperas in The Fantendo Survivors as a playable character, he is a kamikaze fighter, he can use Bomblobs, his fuse and his tongue.

In this upcoming game Bombell appears as a playable character. He's the only character with the Explosive element and his Special Move is Bomblob Blast.

Bombell appears as a playable character in this game with his Gear called Bomblob and as a "Fly" type. His attacks are:

And his Special Tricks are:

Bombell as well as Benjamin appears as a playable character in Project Fan10do. Not much information is known at the moment.

Bombell appears in this game as DLC character. His attacks and moves include turning invisible, hovering, exploding and even creating and controlling 3 Bomblobs throughout the levels.

Booster is Bombell's first and best friend. They both are shown to have a lot of fun together, although their personalities are very different, with Bombell being very adventurous and heroic, and Booster being very shy and serious.

Bombella is Bombell's girlfriend. During his adventure in Bomb Frenzy, Booster and him met her when she was being attacked by the Bombx. When they saved her, Bombell and Bombella fell in love, and the two eventually became a couple later in the game.

Bombell and Benjamin seem to be good friends as well. Benjamin likes to help Bombell and others, and as a reward in Bomb Frenzy he decides to help him on his quests for saving him from the Bombx.

Shadem is Bombell's arch-enemy. Bombell wants to stop his plans of ruling the kingdom, and Shadem, after being aware of this, wants to get rid of Bombell and his friends.

Before Bombell got his transformation and became a hero, he was a member of King Boo's Troop and was living in his mansion along with other species of Boos and ghosts. King Boo seemed to be nice to Bombell, even though Bombell left the mansion and the troop (and he didn't know how bad Bombell was treated by the other Boos). It is unknown if Bombell and King Boo still have any kind of relationship. 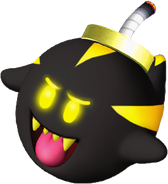 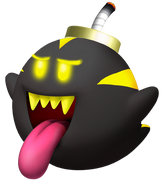 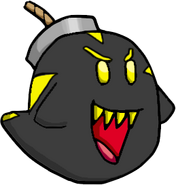 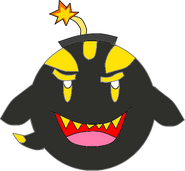 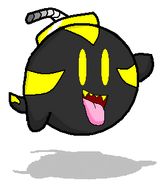 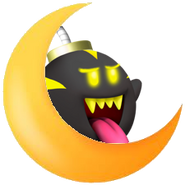 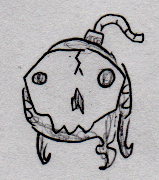 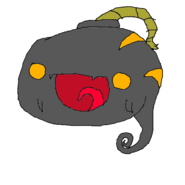 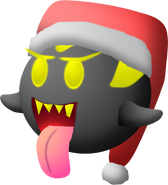 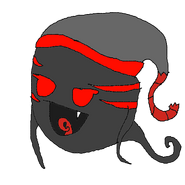 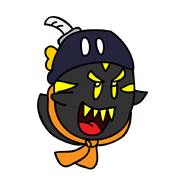 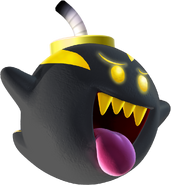 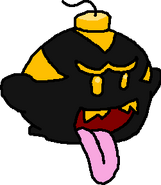 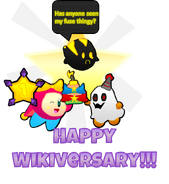 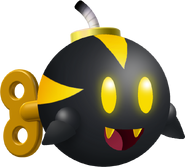 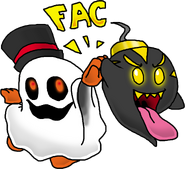 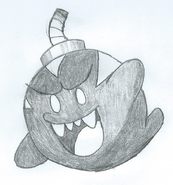 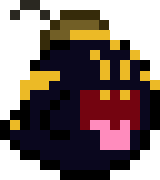 Bombell as a costume in Super Mario Maker.
Community content is available under CC-BY-SA unless otherwise noted.
Advertisement