Bolt is a sketch drawn by Douglas in Cursed Enigma 2: Virtual Realm.

Bolt is made up of black, grey and white. He is a simple stickman with wings and a cape.

Bolt carries a huge pencil, which he uses to create things to attack enemies.

Bolt makes his first appearance in Cursed Enigma 2: Virtual Realm, when Douglas was in trouble. Bolt was drawn by Douglas to help stop Robo. Since then, they have been best friends and have been on adventures with each other.

Bolt makes an appearance as an unlockable character in Moonlight Racing. He is a very speedy character but has bad accerleration. His vehicle is called the Sketch Slider.

Bolt reappears in Moonlight Smash as an unlockable character. Nothing else is known so far...

Bot appears as a playable character in Fantendo Nightmare. He can be unlocked in Chapter 63: Darkness Castle Revisisted.

Bolt appears as a playable fighter in FSBW. His moveset is 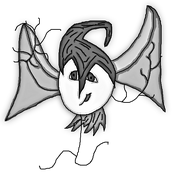 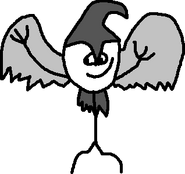 Fantendo Smash Bros. Warzone
Add a photo to this gallery
Retrieved from "https://fantendo.fandom.com/wiki/Bolt_(Cursed_Enigma)?oldid=1721539"
Community content is available under CC-BY-SA unless otherwise noted.