Nemain rushes towards the villager, sword grazing through the wind. Once close, she swings, dealing 10 damage, her effort waning a little on account of the foe's lance. She responded by stabbing at her, dealing 1 damage and knocking her down to 20 HP. Nemain attempts to swing again, though the villager evades it.

Steve gets in position and sends forth a bolt of lightining, managing to overwhelm him.

The Fighter rushes towards the remaining house and opens up.

A couple of Mercenaries step out beside the Fighter.

The other Fighter rushes towards Corbin. He swings though fails to strike, allowing Corbin to swing twice. Corbin deals a combined total of 18 damage, bringing the Fighter down to 3/21 HP.

The Mage, meanwhile, approaches Rio and casts his spell. He deals 11 damage, knocking her down to 9/20 HP. He has the speed for another strike, and ushers forth a powerful fireball... fortunately, Rio's just barely able to sidestep it.

The two cavaliers begin to separate in preparation. 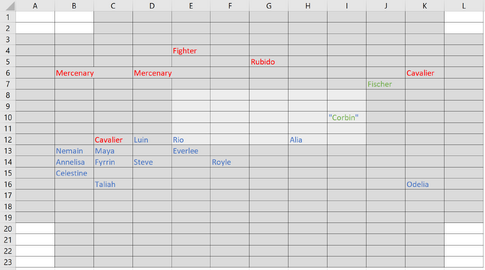