Bluebear is the main character in the Animal Crossing: Saviors Of The Wild World! series.

Bluebear was born in the city and lived their for two years. When she turn three her family moved to Animal Town to live a more peaceful life. she attended Animal University when she was in kindergarten. She met Daisy when they noticed they have the same lunch. She is currently living in Animal Town, attending in Animal University as a sixth grade student when school starts. 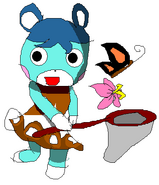 Animal Crossing On Air render
Add a photo to this gallery
Retrieved from "https://fantendo.fandom.com/wiki/Bluebear?oldid=1721535"
Community content is available under CC-BY-SA unless otherwise noted.