In Mario: Card Battle, Owser sends many Blue Piranha Plants to different locations to stop Mario and his friends. The first one the player faces is not an enemy, but the 4th boss.

Blue Piranha Plants reappeared after a five year absence in the game? New Super Mario Bros. N. They were changed to be better suited for platformers.?

Blue Piranha Plants look like normal Piranha Plants, but their heads are mostly blue with a small amount of red around their air dots. They also have three heads.

Blue Piranha Plants have the ability to suck up things like a vacuum. When they catch their opponent, they spit them out. This can be difficult to dodge in the game, especially if the player is using Wario, a slow-moving character.

The only way to kill them is to hit all their heads with a projectile, jump on their heads or have them suck up a Spiny or Bob-omb. If one head is defeated, the others will become more aggressive until the head grows back or the rest are defeated. 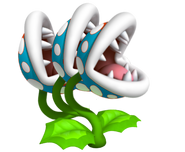 Blue Piranha Plants from Mario: Card Battle
Add a photo to this gallery
Retrieved from "https://fantendo.fandom.com/wiki/Blue_Piranha_Plant?oldid=1957168"
Community content is available under CC-BY-SA unless otherwise noted.