"Blue Mario", also sometimes referred to as "Referee Mario", is a recolored Mario character, first appearing in Mario Tennis for the Nintendo 64. He is not playable, but he can be seen sitting in the referee's chair during some matches when one is playing as Mario. "Blue Mario" can also be seen in the multiplayer game of the Super Mario Advance series, but relation to the "Blue Mario" of Mario Tennis 64 is not explicit and thus currently unknown unless confirmed by Nintendo. It is also currently unknown if he is related to Mario or not.

"Blue Mario" is physically identical to Mario in terms of his facial features, with only his clothing differing from the heroic plumber's. Instead of a red shirt and blue overalls, "Blue Mario" wears a suit. The name "Blue Mario" is derived from his most well-known appearance, though he can also appear with several different color schemes. The most popular appearance of "Blue Mario" wears a blue blazer over a tan vest and cyan dress shirt, with a red tie tucked under his vest and a blue cap on his head. Other color schemes include a tan blazer with a blue vest, and a green blazer with a tan vest, and he also changes between wearing a blue hat and a red hat that is identical to Mario's. Aside from these clothes his appearance is always consistent, consisting of blue pants (presumably jeans or a similarly-textured type of dress pants) and brown shoes that are identical to Mario's. He has a pocket on his blazer embroidered with the letter "N" - the reason for the inclusion of this letter is unknown, though is likely a reference to "Nintendo".

As an unnamed background character, and a recolor at that, "Blue Mario" has had no official role or importance to any Mario game in canon, and there is no known information about him. It is uncertain what his name is, what his life is like when he isn’t acting as referee for Mario, what his relation to Mario or friends is, or what he’s even like as a person and a character. Because of this, there have been many theories about him, his identity, and relation to the Mario cast.

It has been claimed that his color scheme is meant to be a reference to the original Mario design in terms of color, but citation is needed - and it may just be a coincidence. However, it is true that Mario acting as referee - and the alternate blue colorscheme that serves as the origin of "Blue Mario" - is a reference to Tennis for the NES in which Mario is the referee and happens to wear blue. But this does not change the fact that this means that "Blue Mario" physically exists separately from Mario.

There have also been cases of those who have theorized that "Blue Mario" was an early version of Waluigi. However, this is clearly false as Mario Tennis 64 was the same game that introduced the existence of Waluigi as a character and as an evil counterpart to Luigi. "Blue Mario" can still be seen in the referee's chair during any match starring both Mario and Waluigi.

The Super Mario Bros. Encyclopedia released by Nintendo in 2015 does not include a reference to "Blue Mario". As this book also officially recognizes Blue Bowser as a separate character from Bowser for the first time since the release of 1993's Super Mario All-Stars, it is possible that this "Blue Mario" referee is indeed intended to be Mario, and that his appearance as referee even should his playable counterpart be in a match may be the result of developer oversight. 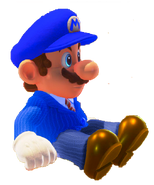 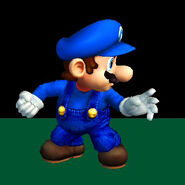 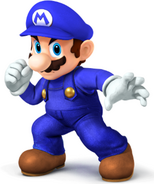 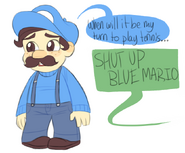 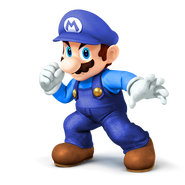 Retrieved from "https://fantendo.fandom.com/wiki/Blue_Mario?oldid=3208712"
Community content is available under CC-BY-SA unless otherwise noted.