“You're in for a surprise. Bowser's got a twin.”
— Super Mario All-Stars Player's Guide

Blue Bowser, also referred to as Bowser's Brother, Bowser's Twin Brother, Bruce or Bowser Imposter, is the biological father of the Koopalings and a character that debuted in Super Mario Bros.: The Lost Levels as a boss, and is exclusive to the Famicom Disk version of it. Though he can be easily confused with the numerous Fake Bowsers that appear in The Lost Levels and is deemed as such in Super Smash Bros. for Wii U and Super Smash Bros. Ultimate tips, supplementary material reveals that he is the younger twin brother of Bowser.

Blue Bowser resembles his older brother in appearance, albeit with a blue and brown colour scheme. Though their appearances are similar in the original release of Super Mario Bros.: The Lost Levels, Blue Bowser is clearly a being separate from Bowser and the Fake Bowsers he creates with magic: unlike the latter, Blue Bowser does not turn into an enemy when defeated via Fire Mario's fireballs. Additional proof of them being separate characters appears in World D-4 of The Lost Levels, where a character who appears to be Blue Bowser is fought, but turns into a Spiny once hit with enough fireballs, showing this one to be a fake.

Blue Bowser has the same great abilities Bowser has, throwing hammers and fire to stop Mario and Luigi. The 1994 book Super Mario Bros. Daizukan implies that Blue Bowser is weaker than his brother, with his strength being about the same as the Fake Bowsers that Bowser can create.[1] A tip in Super Smash Bros. for Wii U calls Blue Bowser a "Bowser Imposter", and likens him to the multiple Fake Bowsers fought before him.[2]

Blue Bowser's direct relationship to Bowser is unknown, as the two are never seen directly interacting with one another in The Lost Levels and Blue Bowser has not made an appearance since. However, circumstances around Blue Bowser's appearance hint towards him being Bowser's most-trusted ally, as Blue Bowser is the final obstacle that Mario and Luigi must face before Bowser in in World 8-4.

Conflicting information exists as to whether Blue Bowser and Bowser are related, though most information declares the former to be the latter's younger sibling. Japanese guides for Super Mario Bros.: The Lost Levels did not explicitly confirm any relationship between the two, though did deny the notion of the two being twins. Several materials released prior to Super Mario All-Stars, such as in 1985's Super Mario Zen Hyakka[3] and 1994's Super Mario Bros. Daizukan[1], would later state that the two are siblings, with Bowser being the elder of the two; Super Mario Zen Hyakka, written in collaboration with Nintendo, lists Blue Bowser as part of the Koopa Troop's King Tribe alongside Bowser and the Koopalings. Most modern references to the character make his connection to Bowser more ambiguous, with Super Smash Bros. for Wii U and 2015's Encyclopedia Super Mario Bros. describing him as similar to a Fake Bowser but distinguishing him from Bowser's other doppelgangers and saying his true identity is unknown[2][4]. In terms of the English continuity, Blue Bowser is officially named "Bowser's Brother" in Nintendo Power's guide to Super Mario All-Stars, meaning that, at the very least, Nintendo of America seems to agree with the early notions of Blue Bowser being Bowser's younger twin brother.

Blue Bowser appears in Jake's Super Smash Bros., marking his second-ever appearance after Super Mario Bros.: The Lost Levels. He is an unlockable playable character separate from Bowser, with a moveset more inspired by Super Mario Bros. and The Lost Levels than modern games like Bowser's is. Like Bowser, other fighters can not perform Footstool Jumps off Blue Bowser like they would other characters, as doing so will cause them to take a small amount of damage.

In a update of the game, Blue Bowser was added as a possible Boss character that players could put in their levels. They needed to use the Paint Brush power tool to paint Bowser into Blue Bowser. Blue Bowser functions pretty much identically to how Bowser would, and can even be given the Weird Mushroom just like Bowser could.

Blue Bowser reappears as a boss in the game, acting identical to how he did in Super Mario Bros.: The Lost Levels. He only appears in the game's last world and the Letter Worlds. He is also joined by a red version of Bowser called Red Bowser.

Blue Bowser appears in Super Mario Finale in the Underground World as an easter egg boss. After Mario makes it to the last cave area, he enters a room similar to the castles of Super Mario Bros. and Lost Levels and is able to fight Bowser in the same way he did in those games in order to activate the Sentinel Orb. If Mario returns here afterwards, Blue Bowser will appear instead inexplicably.

Blue Bowser also has a chance to appear right before the final boss during the boss rush. During normal Bowser's segment, there is a 10% chance that Blue Bowser will appear instead. In both cases, this is purely aesthetic, and he acts exactly the same.

Blue Bowser makes an appearance in this game. The third course in the game, Blue Koopa Kingdom, is centered around him. In Underworld Trials, he is the ruler of a kingdom and has an army of minions, similar to Bowser. A small squadron of Toad soldiers stationed themselves near his castle, planning to end his reign of terror with the help of Mario and co.

Throughout the missions in the course, Mario and co. are often found sneaking into the castle, either helping the Toad soldiers collect parts or take out spies on the castle walls. Once the player has unlocked the Rainbow Stone mission, the Toad squadron finally storm Blue Bowser's castle to defeat the king himself. Blue Bowser challenges the player, and ground pounds to take them to an underground lair, consisting of a large platform surrounded by lava.

In battle, Blue Bowser will attack by spitting fireballs at the player, as well as tossing hammers. To damage him, the player must use Koopa shells to stun him and push him backward. He will eventually fall into the lava below, and will climb back onto the platform. This must be repeated three times to defeat him. After falling into lava twice, Blue Bowser gets enraged and starts attacking faster. Once defeated, the player collects the rainbow Mystic Stone.

Blue Bowser appears as an unlockable playable character in Stampede Breakfast 2. Despite having very similar looks to Bowser, he is not a clone at all. While Bowser takes inspiration of his moveset from Super Mario Odyssey, Blue Bowser uses Bowser's moveset from the Super Smash Bros. series. Like Bowser however, he is a heavyweight, difficult to KO, and is able to dish out serious damage with a few simple attacks.

Blue Bowser reappears here as the Boss of World 1, now with the name of "Ceroar", and again as Bowser's younger brother. Bowser seemingly forgave him for his previous failure, but after failing to stop the heroes from beating him, again, Bowser kicks him out. Ceroar, stunned and very hurt, decides his brother is truly evil and joins the heroes on their journey to stop Bowser. He is the only character (not counting Heavy Miis) with a strength of "Strong".

Blue Bowser appears as a boss enemy in Super Mario Maker Chi, being a variant on Fake Bowsers who he shares their own placement limit of five per subarea. They can "carry" an enemy if the player drags a enemy over to them to replace their death sprite, although they can also die normally with their own death sprite. They stand in one spot and only throw hammers. They can be killed in 5 fire balls as opposed to Bowser's 20 fireball resistance. 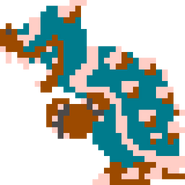 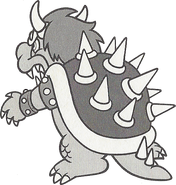 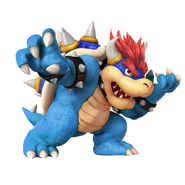 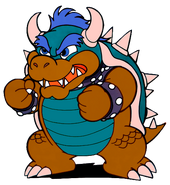 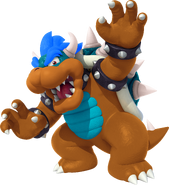 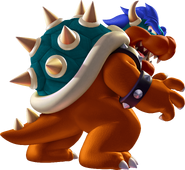 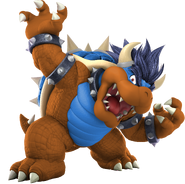 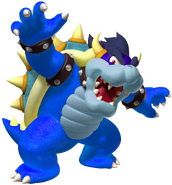 Blue Bowser, or "Ceroar," as he appears in Super Mario 3Deluxe! 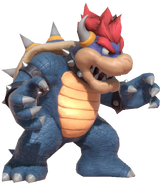 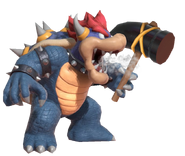 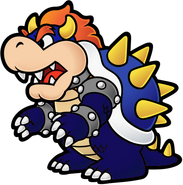