Blue Boo is the protagonist of Boo! and an anti-villain, originally working for King Boo before fleeing from the Lightning Kingdom to be a hero. He originally debuted in Super Mario Kart All-Star Collection to replace Lakitu's role in ghost levels as it simply made more sense (Boo was an item and King Boo was playable).

Not much is currently known about the character except he used to be a normal Boo until he was illuminated with a blue light which stayed in his body and, therefore, stayed blue. As Blue Boo is purely a nickname, we can assume (and it has been confirmed) that it is from early childhood and it was used so much (whether in a friendly way or to make fun of him is unknown) that he can't remember and denies knowledge of his real name. A few years later as an adult, he became a minion of King Boo eventually leading to the beginning of Boo! where he kidnaps many species that are visiting from the Mushroom Kingdom, with help from new friends, until realising it is much better to be good and goes off to live a happy life, after setting the people free of course, there.

Blue Boo appears in this game replacing Lakitu's role for ghost levels. He was replaced in update 1.1 for Boo Lakitu.

Blue Boo is a playable character along with Pink Boo, who was solely made to even out gender ratio.

Main article: Boo! Blue Boo is the main character of the RPG.

Second party character exclusive to the Portal version of the game.

Spoiler warning: Plot or ending details follow.
Blue Boo is set to appear one last time as a character in an untitled fighting game being developed for the Thwii. His appearance is set to be canon to the short-lived Boo! series and will involve Blue Boo being brought back to life, after being killed off in Boo: Master of Disguise, and forced to compete in the fighting tournament.
Spoiler warning: Spoilers end here. 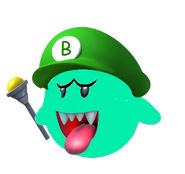 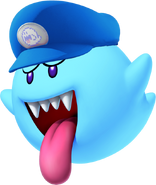 An updated design by Mirai Moon (t∣b∣c) which is actually blue, used for later appearances 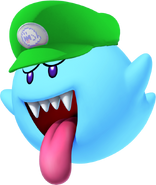 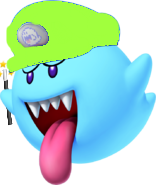 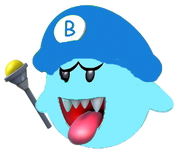 The original design with the updated colour scheme 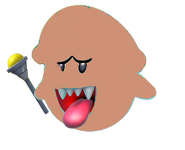 Add a photo to this gallery
Retrieved from "https://fantendo.fandom.com/wiki/Blue_Boo?oldid=3200894"
Community content is available under CC-BY-SA unless otherwise noted.