Bluckos are block like enemies who appeared in Kirby Mass Attack, they appear to be normal Star Blocks, but when the Kirbys come near, they will reveal to be Bluckos, with eyes and a smaller star. They then proceed to hop torwards the Kirbys in an attempt to smash and instantly kill them. But despite this, they are also very weak, as weak as a normal Star Block, one hit will defeat Blucko by smashing it. Usually they hide fruit in their bodies, too.

In ice and cloud levels, Ice Blucko can be found, they are identical to Blucko, and only differ cosmetically.

In this game, Blucko behaves the same. 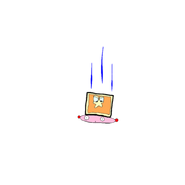 Kirby Mass Attack 2
Add a photo to this gallery
Retrieved from "https://fantendo.fandom.com/wiki/Blucko?oldid=2982169"
Community content is available under CC-BY-SA unless otherwise noted.