The Blorp is a type of edible fruit-vegetable known for its disgusting taste and appearance. Some games treat it as a poisonous item, though research suggests that this is largely a psychological effect and is not entirely induced by the Blorp's taste.

Blorps are traditionally grown on the Missyntile Homeworld, benefiting from the swamplike geography. However, it has been introduced as an invasive species to various other environments such as Zeon.

The plant body is a twisted vinelike structure with a green coloration and small thorns. It connects to the fruit with drooping lobate leaves.

The Blorp fruit is an oozing, rounded snot-green ball that constantly bubbles, generating sickly ambient noise and splattering its juice nearby. It is this behavior that seems to enable the plant's reproduction.

Blorps that have been exposed to sunlight for a short while begin to develop a white layer of fungus-like mold on the surface.

If prepared in just the right way, a Blorp will contribute an interesting flavor distinct from any of the five previously known basic tastes. This is necessary in certain recipes. However, it is still necessary that the consumer not see the Blorp before or as they eat it. 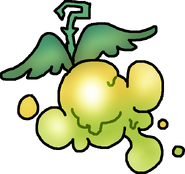 Blorp art from Fantendo Smash Bros. Victory
Add a photo to this gallery
Retrieved from "https://fantendo.fandom.com/wiki/Blorp?oldid=2716152"
Community content is available under CC-BY-SA unless otherwise noted.