Blooper (originally called Bloober) is an underwater creature in the Super Mario series. He gently floats around attempting to attack the Mario Bros. in their many adventures. Bloopers are mostly found in the water but can also come out of the water (mostly in sports games). Bloopers also have a mouth (which is rarely seen) which they use to squirt ink at Mario and Luigi. A blue species of Blooper called the Squirto Bloopers are one of the only Bloopers that always have a visible mouth. Another Blooper subspecies called the Camo Blooper has the ability to spit ink out of their mouths from a distance.

Bloopers are also featured as an item in Mario Kart as of Mario Kart DS. When activated, the Blooper will target all racers ahead of the user and squirt ink onto them that blocks their vision. The vision impairing ink also causes computer racers to swerve, as it worsens their handling.

Blooper appears as one of ten subs in Mario Rugby League. He has all balanced stats and has no special skills at all. He is only used when a player on the Delfino Locals team is injured.

Blooper is playable along with Cheep-Cheep and Gooper Blooper in Super Mario MHL.

The Blooper appears as an item in Mario Kart 9. Additionally, hacking the game allows for a Blooper to become playable, though reuses animations from the female Mii. 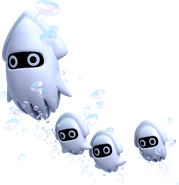 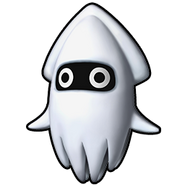