Blooey, known by his friends as the White Torpedo, is a Blooper who teams up with Luigi in order to find the Marvelous Compass in Paper Mario: The Thousand-Year Door. Before joining Luigi, he lived in Rumblebump Volcano.

During his quest, Luigi was lead to Rumblebump Volcano to find one of the pieces of the Marvelous Compass. Here, he met Blooey, a white Blooper, who joined him on his quest. While Luigi claims to have successfully thrown Blooey at a giant golem and obtaining one of the Marvelous Compass pieces, Blooey says that he actually tripped and dropped him into the lava, changing his skin from white to a golden-tan. He despises Luigi because of this, and says he's only tagging along with him so he can eventually get revenge. Later in the game, he can be found again with Luigi, looking even darker tan for unknown reasons. He appears to have let go of his grudge against Luigi, though he is amused with his misfortune.

When Luigi starts his journey in the Waffle Kingdom, he meets Luigi as he travels to Rumblebump Volcano. He decides to join Luigi on his quest, but when fighting a mini-boss, Luigi tries to throw Bloeey, but trips, tossing him into lava. This causes his skin to be burned to a crisp orange, rather than a pale white. He follows Luigi, to make sure that he will make Luigi rue the day he dropped him. 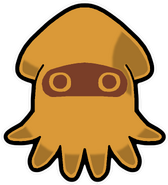 Luigi and his partners by Pokerninja2 (t∣b∣c)
Add a photo to this gallery
Retrieved from "https://fantendo.fandom.com/wiki/Blooey?oldid=3057096"
Community content is available under CC-BY-SA unless otherwise noted.