Fantendo - Game Ideas & More
Register
Don't have an account?
Sign In
Advertisement
in: Free to use Characters, Characters, What is the New Fantendoverse?, Heterosexual Characters

Natasha Thel, known to most by her codename Blizzard, is a young woman and a member of the Misfits. Grouped alongside Aero, Beam, Mission, and Frostburn, she was a participant in the battle against E.N.D.O.

Blizzard's first appearance is as a supporting character in Aero & Beam. Reception for the character has been positive.

Blizzard has long, white hair tied up in a bun. Her skin is a light brown, and she has light blue eyes, always seen with square glasses on. Her body type is tall and skinny. She wears a light blue jacket with a white undershirt and jeans that match her jacket. On missions, she wears the standard jet black Misfits suit of armor.

Natasha was born to two loving parents, who worked hard to provide her with a comfortable, middle class life. Upon discovering her cryokinetic powers after graduating college, she decided to forgo a traditional career to help people as a Misfit. Her parents, although worried, approved of this choice.

With extensive work, Natasha became a Misfit, and was given the codename Blizzard due to her powers. She quickly befriended most of her partners through various cases, even slowly learning to get along with the abrasive Frostburn. A romantic, Natasha also attempted to act as a matchmaker for Aero and Beam, assisting them when the others were incapacitated. A battle with a villain named Flamethrower left her with a gunshot wound to the side, living only due to the help of her friends. After slowly recovering, she resumed her normal life as a Misfit.

Blizzard is a kind person who encourages other people to do good and be honest, two virtues she believes are key to living a happy life. Although she can be overbearing and stubborn sometimes, she has a good heart and genuinely wants to make the world a better place.

Blizzard does use violence, but is against starting a fight, preferring to use her powers for self-defense or helping others. In addition, she attempts to befriend everyone she meets, sometimes trying too hard to do so. One of her most apparent traits is, good or bad, when she sees that two people love each other, she won't stop in her relentless pursuit to get them together.

Blizzard, besides having Misfits training in hand-to-hand combat among other things, is gifted with cryokinetic powers. These allow her to create anything from a snowflake to a blade made out of ice, and she has trained over the years to learn how to use her cryokinesis to the fullest extent.

However, these powers come with the weakness all ice and snow has, everything she makes is easily melted by fire or heat. Although she's strong against most opponents, she has little chance of beating a pyrokinetic or anyone with fire on hand. Even high temperatures can put a serious damper on her abilities.

Blizzard, as drawn by Shadow Inferno. 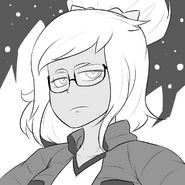 Blizzard, as drawn by Ziegs.