Blitztank is a series of mass-produced characters in the Akatsuki En-Eins series who debuted in Akatsuki Blitzkampf and mainly serving the main antagonist organization, Gesselshaft.

Blitztanks are mass-produced electric tanks created by Gesellschaft using a Blitz Engine, the same engine implanted in Akatsuki and one of Gesellschaft’s leader Murakumo Zero (or simply Murakumo), with Gesellschaft modified the Blitz Engine into their own version, renamed Perfecti Engine fortheir other projects. After the end of World War II, Gesellschaft created a prototype, but the project was cancelled before it could proceed any further.

Behind the rumored mysteries on creation of Blitztanks, it is suspected that Blitztanks were original humans converted into cyborgs in tanks’ bodies, making them look like living tanks.

Blitztank solely serves Gesellschaft for their own evil ends. However, one Blitztank, just like one Elektrosoldat and one Tempelritter begin to rebel against Gesellschaft. The playable Blitztank’s case when encountering Akatsuki and their universe's Murakumo, it is likely have a lost memories relating to Blitz Engine’s creation.

Blitztank is one of the playable characters. 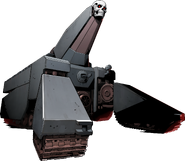