Blimp Yoshi is one of Yoshi's power-ups in Super Mario Galaxy 2, along with Dash Yoshi and Bulb Yoshi. It is achieved by eating a Blimp Fruit. In this form, he turns light-blue and expands like a balloon. Blimp Yoshi can expel air from his mouth, allowing him and Mario to float upwards for a short period of time. Similar to Bee Mario, Blimp Yoshi has a meter that indicates how long his powers last, though the meter doesn't stop when Blimp Yoshi stops. However, by touching another Blimp Fruit, Yoshi can refill his meter. Holding the A button allows Yoshi to stop expelling air and float in place, and shaking the Wii Remote will allow him to return to his normal form without waiting for the meter to run out. Blimp Yoshi can also aim his air to travel more horizontally and dodge obstacles that may be in his path.

This form is usually used to scale heights that otherwise couldn't be achieved. Blimp Yoshi is unable to use his tongue or Flutter Jump in this form, so his abilities are more limited compared to Dash Yoshi or Bulb Yoshi. 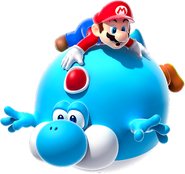 Blimp Yoshi in Super Mario Galaxy 2
Add a photo to this gallery
Retrieved from "https://fantendo.fandom.com/wiki/Blimp_Yoshi?oldid=3096530"
Community content is available under CC-BY-SA unless otherwise noted.