Blaze the Cat is a character appearing in the Sonic the Hedgehog series. Blaze is a lavender cat with a purple dress and is a friend of Sonic. She is actually from another dimension. Blaze is portrayed as the guardian of the Sol Emeralds and a princess, although some games don't touch these details. She has the power of pyrokinesis, the ability to create fire with one's mind. Blaze can transform into Burning Blaze by using the Sol Emeralds, but it is unknown what the result of Chaos Emerald transformation is unknown.

Blaze is the secondary main character in Kirby RPG and the Infinity Shard, she has a romantic attraction towards Waddle Doodle. She helps Kirby find the infinity shard.

In this game, Blaze's story is revealed. Blaze is a village from Catreus People, one day, she is selected to be the next Sol Emeralds protector, but she failed and Eggman stole the Sol Emeralds. With help of Silver, she starts to recover the Sol Emeralds.

Blaze appears in the game as the fourth playable character. When the future is attacked by unknown forces, Blaze and Silver the Hedgehog go to the past. Both of them separate, looking for Sonic. Along the way, Blaze fights Eggrobo.

She can be seen in Fiery Volcano in the game. Interestingly, she seems to lack her white pants, her dress is much longer, almost covering her legs, her sleeves are broad shoudered, and she wears a crown on her head.

Blaze will appear again in Pikachu's Final Destiny 2, as an ally in Eevee's story. She will wear a Pink T-Shirt and a Purple Tennis Skirt in the game.

Side-Flame Spin:Blaze spins (not spin dash, just a spin) and shows a sign of fire in her spin.

Up-Fire Jump:Blaze rockets herself up with a flame spew out of her hands. The 3rd best recovery move. Next to Shadow and Omega/Metal Sonic.

Down-Burning Grounds:Blaze sets nearby ground areas on fire for a few seconds.

Blaze appears in the anime, along with Silver, are guarding the town where Renan lives. In this series, instead of her usual outfit (except her collar, gloves and socks), she wears a pink small sized t-shirt with a flame on it, a red skirt with two yellow stripes around it, and a pair of indigo/dark purple sneakers, but, in some early episodes, she was seen wearing her usual outfit.

Blaze makes an appearance in Team Rose as part of Sonic Heroes 2.

Blaze was the champion of Group D by won against Silver, But loss against Sonic in Champion VS Champion Round.

Blaze appears as a playable character in the game. She appears at the Torino (Turin) 2006 Olympics as well as the Dream Olympics, and is an All-Around type character.

Blaze in the new game Sonic Future, as the queen of the Chaos emeralds

Blaze in Adventures Of Sonic The Hedgehog (Video Game)

Blaze in Mario & Sonic at the Rio 2016 Olympic Games 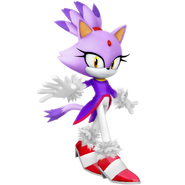 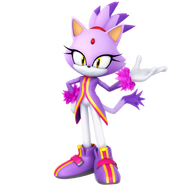 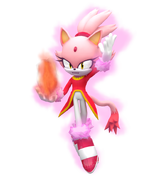