“This universe is gonna go to hell, isn't it...”
— Blaze
This character is free to use in fanworks. Unless permission is given by the owner, all other usage of the character will be considered non-canon.

Petra "Blaze" Zednik is a human from Earth. A top-class agent who is considered one of the best agents in the world, Blaze is rather memorable for her rather long hair, fantastic reaction times and her skill with computers.

Blaze is a short 17-year-old girl who is notable for her extremely long red hair. Blaze tends to wear tough leather, mostly due to the hostility she can encounter. Her outfit consists of a brown biker jacket with a red shirt underneath, black gloves, dark blue skinny jeans and black boots. Her eyes are hazel.

In Tayshaun & Amy - The Other Side, it's revealed that Blaze has an eyepiece in her skull that allows her to scout out any potential fighting talent. However, this eyepiece slid into her brain during The Other Side due to her brain dragging it in. She also tends to hold shurikens (throwing stars) in her hand in case of an enemy getting hostile. She also carries battle axes.

Blaze was born in the Czech Republic, to a secret agent father and a doctor mother. At age 4, Blaze's family moved to the United States. Blaze has never had that normal of a life. Her precognitive powers were rather powerful when she was younger, but it has weakened a little bit over time. When Blaze was 13, her father gave her shurikens, of which she still uses to this day.

She planned on spending her days with her boyfriend, Quentin, but her job gets in the way constantly. She usually has a normal life nowadays, or at least tries to, but her instincts tend to get in the way, and what with the gigantic portal above her world, it's never easy to live like nothing happened.

Aside from the bizarre events, Blaze was part of some sort of spy group, which was apparently the same group that approached Amy, and Blaze disliked working with them, especially considering some things they have done in the past. Blaze eventually left this team and moved on to work for the FBI. Blaze knows a lot of dark secrets about the town she lives in, including knowledge of an alien. The only thing that has slipped past her is the fact that Amy is from the future.

Blaze's extraordinary senses came from an experiment she was in when she was 14, where scientists took her as a test subject and mutated her abilities to a great extent. She had her sight mutated to the point she could see in the dark without any sort of assistance and her hearing was mutated to the point she could hear conversations from the other side of a large supermarket without difficulty. Her IQ also shot up from what it was.

During Tayshaun & Amy - The Other Side, Blaze is more in the spy role. She ditches the spy agency to start up her own business and finds more disturbing things about her colleagues, most specifically Nina, finding out she has a transformation but is unsure. She is also given telekinetic powers by Krystal to help her out in trying to do some things without being seen.

Blaze is very quiet most of the time. She is normally rather distressed by her life and finds it difficult to hide her job. Blaze likes to stay quiet so she can be more alert if an enemy tries to attack when she least expects it. She is also very smart, being able to plan out attacks easily without going back on her own word. Blaze is also rather serious at times, more specifically when she is doing federal agent work or going into a fight.

Blaze also has a strong sense of justice, always trying to fight for what she believes is right. Blaze is usually seen as a likable person and gets on with people just fine. Blaze tends to be trusting of most people, but she just can't find faith in some people, such as Mr. D'Angelo. Blaze does not like people making comments about her hair, and usually gets a bit wound up when people ask about her hair, but tends to hide it and simply answers the question.

Blaze has instincts like a ninja that help her hide herself whenever an enemy is nearby. She tends to attack out of nowhere and she finds her espionage to be a great asset for her job as a federal agent. Blaze is also good with technology, and can tamper with machines so that they will follow her command instead of someone else's, and is able to assemble machines with ease. On top of her understanding of technology, Blaze is extremely good with coding, and can decipher most code with ease. Blaze is also skilled at fighting and can disappear from an enemy's line of sight and take them out from behind.

Blaze is fluent in English, Czech and a bunch of European languages. She also has enhanced senses that help her see and hear things others would fail to see or hear. As of First Comes Love, Then Comes Marriage, Blaze has telekinetic powers. She also posesses precognition powers, of which become much stronger than they were after A Day in the Life of Schmidt And Jackson.

Blaze can also, at times, mess with her own DNA to change her eye colour. However, she rarely uses this ability. Blaze is also highly athletic, being very agile and being able to jump higher than some of the most athletic basketball players, and is able to do all of this without tripping over her absurdly long hair. At times, Blaze's athleticism allows her to reach ceilings high above her. Blaze's espionage skills are widely sought after by agencies, most of which have no luck in getting her on board.

Quentin is Blaze's boyfriend. She met him after moving to the USA from the Czech Republic. She got with him having lived in the United States for 3 years. The two have a very close relationship.

Blaze is kind of like a bodyguard to Skye, and looks out for her when they're in school. The two work together when saving the world and are good friends.

Blaze finds Amy's abilities interesting, what with her enhanced fighting skill and her ability to control machines using just her mind. Blaze feels honoured to be friends with Amy.

Jess and Blaze's friendship status is unknown. The two get along well at times while sometimes the air between them is tense.

Blaze has much respect for Alex. She admires Alex's skill and wants to get to know her better. The two barely get the chance to talk but get along well.

Donnie and Blaze are good friends. The two tend to phone each other if they're under stress or feeling nervous and talk to each other to try and calm their selves down.

Krystal and Blaze have great respect for one another. Blaze admires Krystal's willpower and ability to get things done, while Krystal admires Blaze's exceptional espionage skill.

Blaze and Anna are fairly good friends. The two respect each other and Anna is rather interested in Blaze's abilities, while Blaze is inspired by Anna's intelligence and her PhD. 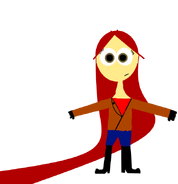 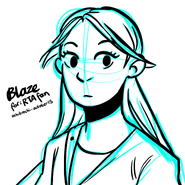 Blaze, as drawn by Ochibrochi 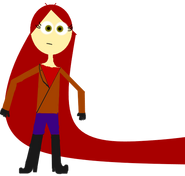 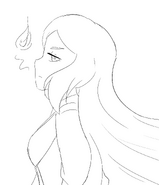 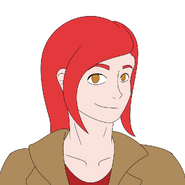 Blaze, as drawn by Qyzxf (t∣b∣c)
Add a photo to this gallery

Retrieved from "https://fantendo.fandom.com/wiki/Blaze_Zednik?oldid=2270362"
Community content is available under CC-BY-SA unless otherwise noted.