Blarggs are monsters that reside in the lava in the Mario series. Their appearance differs from game to game; in their debut in Super Mario World, Blarggs resembled dinosaurs, like a majority of other enemies in the game, like Rexes and Dino Rhinos. In most games starting with Super Mario World 2: Yoshi's Island however, they resemble large, blob-like creatures, usually with a grouchy expression. In most of their appearances, they attack by rising out of the lava in an attempt to attack Mario or Yoshi. In Super Mario World, they are immune to any attacks - including Invincible Mario - and as such serve as obstacles that must be avoided. In the Yoshi series however, Yoshi is able to throw a Yoshi Egg at Blarggs to stun them for a short time.

In the Yoshi games, more Blargg species appear: larger Blarrgs called Gargantua Blarggs are harder to avoid, and blue variants called Nep-Enuts appear as well. Meanwhile, a rarer species called Egg-Enut resides mostly in Warp Pipes, and hide themselves, luring Yoshi with a fake Yoshi Egg. When he's close enough, the Egg-Enut reveals itself and attacks by swinging the fake egg around, which can damage Yoshi.

A Blargg appears in this 1991 arcade game as the main protagonist, trying to chase Mario during the events of Super Mario World.

Blarggs reappear along with their subspecies in Super Smash Bros. Endgame in some lava levels. A new subspecies, called Vemargg make their debut. Vemarggs are poison versions of Blarggs that appear in some poison water levels and forest levels.

Blarggs have lots of variants:

A Blargg as it appears in the Yoshi series

Another blargg from Super Mario World 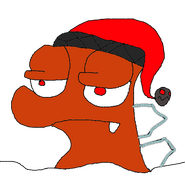 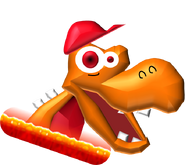 A Blargg wearing a baseball cap (By MGC)

The unfinished model of a Blargg in Super Mario 64. 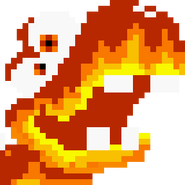 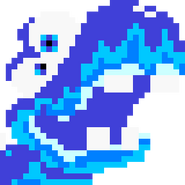 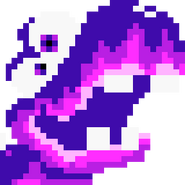