Not to be confused with the game of the same name.

Blacklight (full name: James Wylde) is the protagonist of the Blacklight video game series, and the delinquent leader of Insurgence. He is a heroic and somewhat mysterious man with a largely unknown past. Due to his enigmatic personality, Blacklight rarely speaks, and primarily does so exclusively while giving orders.

While the game shows that Blacklight's past is relatively unknown, the developers of the series have released an account of his history, leading up to the Conquering of Sky City.

Blacklight, the son of genius inventor Marty R. Wylde and his wife - Brenda Daertt, grew up around somewhat futuristic technology. With him, guns that fire lasers as opposed to bullets, and beams made of pure light are commodities, despite them being almost completely absent from the outside world. At around 16 years of age, his parents died in a car crash, and he was heartbroken. Lost and confused without his father's knowledge and mother's care, he left Sky City for a year, before stumbling across a group of heroes and joining them for a small period of time.

After he became depressed, as the group of heroes could not fill the hole for where his mother and father once were, he abandoned the group, and (again) left Sky City, this time to find some way to allow him to follow in his father's footsteps.

However, before he started his new life as an inventor, Sky City was conquered by a man named Schatten. With the team of heroes that Blacklight travelled with before, now mysteriously gone, he starts up his own team to take down Schatten and end his reign of tyranny.

Blacklight is the main protagonist of the Blacklight video game series. Not much of his role within the series is currently known.

The Adventures of White in the Negative Nebula

Blacklight appears in The Adventures of White in the Negative Nebula as a guest character. Blacklight's main weapon in the game is the Beam Blade, a military-grade beam dagger that he "borrowed" from a military testing lab. He is also set under the "Darkness" category, despite his beam emitting a large amount of light when active. Blacklight is an average character, with both of his stats resting at 4. He is one of the two characters in the game to be from an Orangutang Pizza original series, with the other being Tucker Palli.

Unlike the other guest characters that appear in the game, Blacklight's appearance in Negative Nebula is shown to be canon to his series.

While Blacklight never speaks of White's name in the Blacklight series, he does mention how the "leader of [his] previous team" was somewhat annoying. Despite this, he is shown that he respects White and his ideas, even should they be somewhat crazy at times. He has stated that he is envious of White's ability to command others through trust, and the creativity he puts into his plans. As White indirectly inspired Blacklight's own team, he looks up to the other Kirby as a pseudo-hero figure. 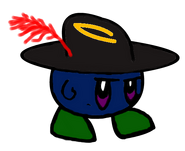 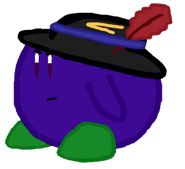 Retrieved from "https://fantendo.fandom.com/wiki/Blacklight?oldid=2843703"
Community content is available under CC-BY-SA unless otherwise noted.